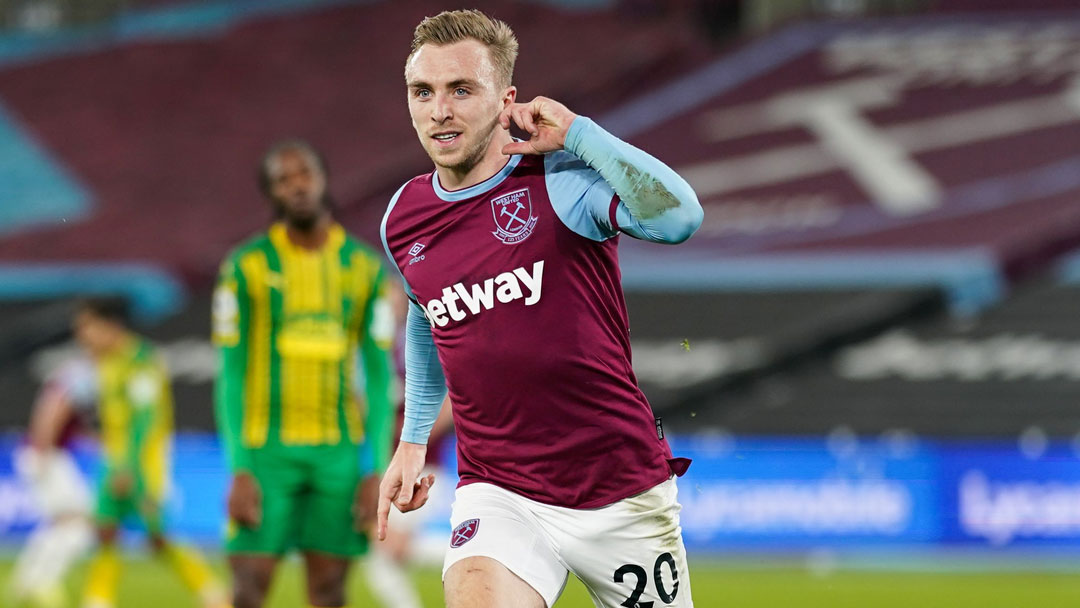 West Ham United’s perfect start to 2021 continued with a 2-1 win over West Bromwich Albion at London Stadium that takes us onto 32 Premier League points at the halfway stage.

The Irons made it four wins in a row in all competitions for the first time since December 2018 and rose to seventh in the table thanks to well-taken goals from Jarrod Bowen and Michail Antonio.

The pair each netted their fifth top-flight goals of the 2020/21 campaign either side of Matheus Pereira’s equaliser for Sam Allardyce’s Baggies, who themselves remain in the bottom three.

West Ham were in almost complete control in the first half, as a quick rundown of the statistics shows. The Irons enjoyed 66.5% possession, completing 262 passes to the Baggies’ 99, and created seven goal attempts to two, with three on target to West Brom’s zero.

Indeed, the only time Łukasz Fabiański was troubled came when Angelo Ogbonna inadvertently headed Jake Livermore’s cross towards his own goal, forcing the Pole to move sharply to his left to make the catch.

At the other end, Sam Johnstone was far the busier of the two goalkeepers, with the former Manchester United youngster being called into action by Manuel Lanzini and Saïd Benrahma.

An unmarked Craig Dawson also headed an early chance wide and Lanzini curled a free-kick onto the roof of the net as the hosts dominated, but it took until added time for West Ham’s pressure to pay off.

Benrahma’s deep cross found Vladimír Coufal on the right side of the penalty area and his cross was expertly diverted into the net by Bowen, who turned his body at exactly the right time to chest the ball past Johnstone from eight yards out. 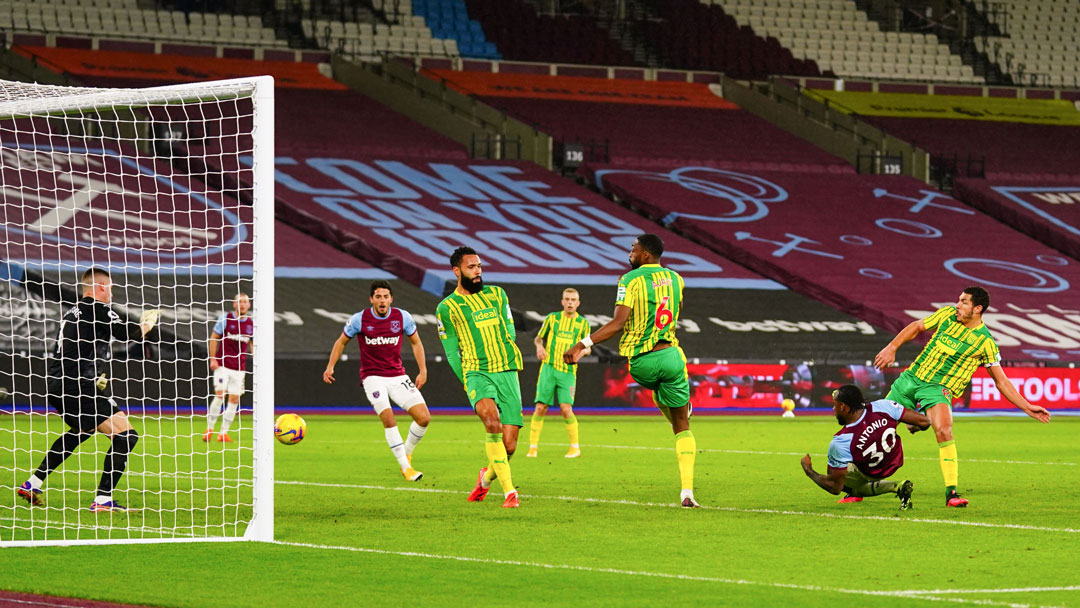 As one might have expected, West Brom emerged from their dressing room with renewed purpose after a half-time team talk from Big Sam, and their improvement was rewarded within six minutes.

Brazilian Matheus Pereira, who had scored twice in the 3-2 win at Wolverhampton Wanderers on Saturday, found the net again, striding forward before unleashing a well-struck left-foot strike from 22 yards that nestled into the bottom left-hand corner.

The goal momentarily stunned the Hammers, but they were soon back on the front foot and went close three times in quick succession just before the hour-mark.

First, Antonio teed up Lanzini, whose first-time shot was blocked by the head of right-back Dara O’Shea, then Rice curled inches wide from 25 yards. Rice then went close again, racing onto a quickly-taken free-kick and firing the ball across the face of goal with Antonio lurking.

Moyes made two changes on 62 minutes, replacing Lanzini and Benrahma with Pablo Fornals and Andriy Yarmolenko, and the switches paid dividends just four minutes later when the Ukrainian headed down Cresswell’s cross and Antonio acrobatically volleyed the ball in from eight yards.

From then on, it was a case of seeing the game out, which Moyes’ men nearly failed to do.
First, Conor Gallagher shot straight at Fabiański with 12 minutes to play, then right-back Darnell Furlong got in front of his man and volleyed inches past the post with seconds of normal time remaining.

Then, deep in added time, VAR official Darren England dismissed a penalty claim when Fabiański punched a high ball clear, then referee Graham Scott booked Gallagher for simulation after the Chelsea loanee threw himself to the ground as Yarmolenko challenged him.

But when the final whistle was blown after four added minutes, the Hammers were able to celebrate winning three more Premier League points and extending their happy start to the New Year.