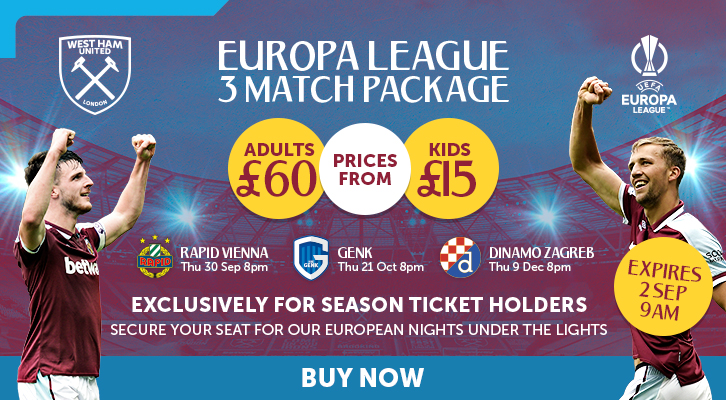 It leaves six mouthwatering home and away ties in prospect – and you can be there for the unmissable moments at London Stadium with our fantastic Three Match package.

The Hammers will be facing opponents from Croatia, Belgium and Austria and you won’t want to miss a kick.

Season Ticket Holders can make sure they don’t miss a kick by purchasing your Europa League package now, but hurry as this package is only available until 9am on Thursday 2 September.

Our three home Group Stage fixtures will take place on the following dates:

A Three Match Package will go on sale to Season Ticket Holders from 2pm on Wednesday 18 August, with their seats being held until 9am on Thursday 2 September, after which tickets for our first home match in the competition will go on sale.

Claret Members will then be able to purchase for home Matchday 1 from 9am on Wednesday 8 September, with General Sale opening on 9am, Monday 13 September

Bondholders can also purchase the Three Match Package until 9am on Thursday 2 September.

Prices for the Three Match Package and Match-by-Match tickets are as follows:

Ticket info confirmed for Wolves away

Hurry to secure your seat for Liverpool