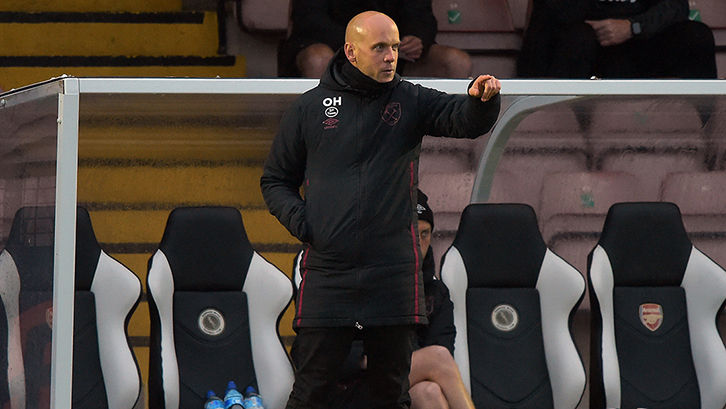 West Ham United women’s manager Olli Harder could find little to fault in his side’s performance in the 2-0 defeat to Arsenal on Wednesday, except for their failure to convert several important opportunities.

Up against an Arsenal side who had won their previous seven games in all competitions without conceding a goal, Harder’s Hammers were understandably considered underdogs, but gave as good as they got in a largely even first half at Meadow Park.

Although Arsenal did eventually go ahead in the 33rd minute courtesy of a stunning strike outside the box from Barclays FA Women’s Super League top scorer Vivianne Miedema, Harder’s team stuck to their task.

Two big headed opportunities arrived on the stroke of half-time but on both occasions, Dagny Brynjarsdottir was unable to find the target.

Arsenal continued to see plenty of the ball in the second half but West Ham also continued to carve out opportunities, yet in the end fell victim to a surging run and calm finish from Kim Little later on – a 2-0 defeat which still contained positives from Harder’s perspective.

The West Ham manager admitted: “We were up against a top-class team, and for us it was about creating as much pressure as possible and not allowing them to dictate the game the way that they want to.

“I thought everybody did brilliantly tonight in terms of the defensive effort and application – seeing my girls chasing them around for 90 minutes on the pitch is fantastic, we just lacked a bit of quality in some big moments.

“I thought there were a couple of big moments for us that we could’ve done better with and that could have changed the game.

“They were under pressure the entire match – we did a fantastic job with that – and to go in at half-time 1-1 would have been a terrific reward for all of that pressure.

“I thought there were also a couple of decent chances in the second half for us, not to say there weren’t for them, but the result is how it is: a 2-0 defeat, and we have to move on.” 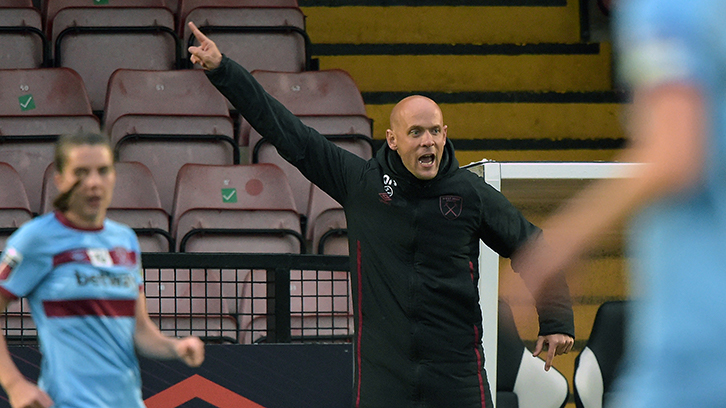 While the Hammers by and large played well in Borehamwood, it was a third Women’s Super League game in a row they have failed to hit the back of the net, having had the better of the chances in 0-0 stalemates against Aston Villa and Everton in recent days.

Harder reiterated following the match that his players are doing everything right elsewhere in matches – but now need to do the most important thing of hitting the back of the net.

Harder continued: “The bottom line is that it’s obviously my responsibility as a coach to get the players organised, get them motivated in terms of their application, and put them in situations that allow them to score. I thought we did all three tonight.

“At the end of the day, it’s now down to the individuals now to take their opportunities. If you watched the Everton game on Sunday, we created monster chances, and we created a couple of monsters here today.

“As a football coach, that’s all I can do, put them in those situations. The rest is on the individual. It’s about taking those little moments, those details, because a result again today could’ve been massive.”

West Ham will now look forward to the Bank Holiday weekend in which a crucial trip to Villa Park awaits them.

Following Wednesday evening’s results, the Irons and the Villans sit in tenth and eleventh respectively – two points and one point ahead of Bristol City in the WSL relegation place.

With all three teams having just two games left to play, Harder and his players will be aware that a single victory – potentially on Sunday – could be enough to secure his team’s place in the top-flight for next season.

“It’s an important game for us to get a result,” the manager admitted.

“We still have everything in our own hands, which is important, and as long as we show this type of character, fight and resilience, which we’ve shown now for several games on the bounce, I have confidence that we can get that result.

“It’s probably not going to be the most beautiful game ever, but at this point it doesn’t matter.”