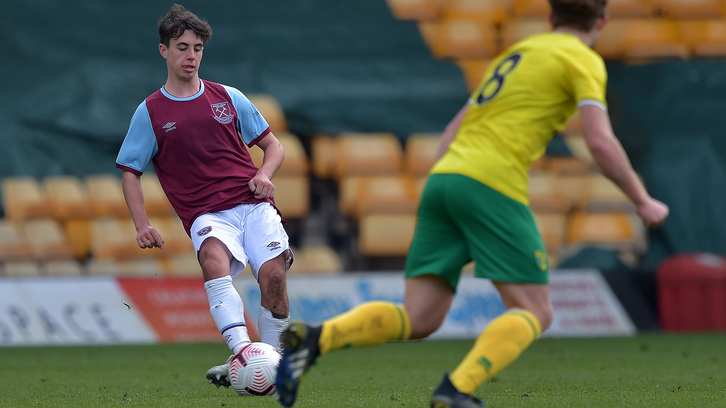 West Ham United U18s rallied from 3-1 down to draw 3-3 with Norwich City U18s at the Lotus Training Centre on Saturday afternoon.

George Earthy had put the young Hammers ahead after just eight minutes, but a frantic five-minute spell saw the hosts hit back with three goals of their own midway through the first half.

Earthy grabbed his second of the contest shortly after the half-hour mark, and the comeback was subsequently completed by Remy Coddington’s exquisite lob with little under 20 minutes remaining.

Kevin Keen’s side made a lightning-fast start in Norfolk and took advantage of some sloppy Norwich City defending to give themselves the lead in eighth minute.

An aggressive press from Coddington saw the Canaries surrender possession to the young forward on edge of the box. The Bermuda youth international then drove towards the byline and cut the ball back across the box to the advancing Earthy, who put the Hammers in front with the simplest of finishes.

That lead didn’t last long as the hosts got back on terms in the 22nd minute with a goal under very similar circumstances. A lapse in concentration from Earthy this time saw Kenneth Aboh steal in and go one-on-one with Krisztian Hegyi in the West Ham goal, and the striker steadied himself and fired low beyond the Hungarian to make it 1-1.

Less than a minute later Norwich took the lead, with Aboh this time turning provider. The forward strode past the Irons defence down the left flank and squared the ball perfectly into the path of Oscar Thorn to tap home at the back post.

After making a bright start, the tide had turned pretty sharply on the young Hammers, who struggled to settle after seeing their early lead disappear.

Thorn made it three goals in just seven minutes for Norwich City with his second goal of the afternoon. Positive play from Joe Duffy saw him feed Thorn in a pocket of space on the edge of the box. The No7 turned and managed to nestle his strike just inside the post to give the young Canaries a commanding 3-1 lead.

In keeping with the flow of the game up to that point, the hosts' two goal advantage lasted barely three minutes. Earthy, once more, put Keen’s side firmly back in the contest with a fine drive.

A looping corner was punched only as far as Earthy by Jayden St Paul in the Norwich goal - and the ball quickly flew back past the stopper courtesy of Earthy’s half-volley, as the young midfielder doubled his tally for the match and the season.

After the break, it was the Irons who went on the charge in search of the equaliser and, despite dominating possession, the clear-cut chances were hard to come by.

With 70 minutes on the clock though, they levelled. A well-measured long ball forward from Michael Forbes put Coddington through on goal and the forward, having won the foot race between himself and St Paul, lifted the ball over the goalkeeper and into the net for his first goal in Claret and Blue.

Following Coddington’s late equaliser, the Hammers had chances to snatch all three points, but a draw was arguably the fair result of an entertaining contest in Norfolk.

“It was a bit of strange one,” Keen told whufc.com after the game.

“We felt that we started really well, scored a really good goal and I felt like we were in control. Then we conceded three goals in seven minutes, which completely changed the game. A couple of mistakes crept in and all of a sudden we’re 3-1 down.

We reacted well in the second-half, scored the equaliser and asked more questions of Norwich without being able to find the winner.

“It’s not always easy to turn the game around on afternoons like this. You start well and then all of a sudden, it’s a bit of a whirlwind and then you’re disappointed. But mentally, to come through that challenge and to get a goal before half-time is hugely important because you know you’re back in the game.

“We reacted well in the second half, scored the equaliser and asked more questions of Norwich without being able to find the winner.”

Keen also praised the goalscoring exploits of young duo Earthy and Coddington, who both impressed at the Lotus Training Centre.

“George Earthy is a really exciting prospect coming into the Club," he continued.

“He’s a real modern-day attacking midfielder: very bright and superb technically. He’s got four goals now for the U18s this season and that’s a really good return for a schoolboy.

“Remy Coddington is another player who has really pleased me. He’s been away in Bermuda as part of a few of their national team training camps. He’s come back in, he’s been really hungry and now he’s got to finish the season strongly, because we’ve got high hopes for him next year.”

With just two fixtures remaining for the U18s, Keen has challenged his side to avoid defeat in their final outings of the 2020/21 campaign.

“Mark Philips (U18s Assistant coach) and I challenged the boys a few weeks ago to finish the last four games unbeaten.

"Since then, we’ve managed to beat Reading and draw with Norwich, so hopefully we can finish the season strongly and I think it’s a good challenge for us to do that.”