Kevin Keen: The U18s gave it their all in FA Youth Cup 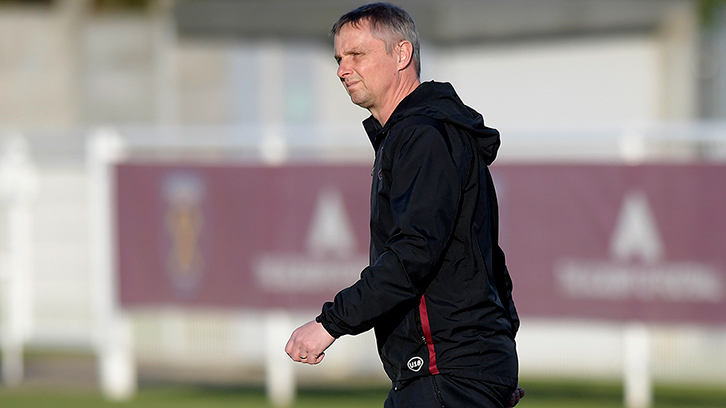 Kevin Keen could have no complaints about the earnestness or endeavour of West Ham United U18s during their FA Youth Cup fifth-round defeat to Arsenal U18s on Friday night.

In their first fifth-round tie in the competition in nine years, the Academy of Football's youth team gave it their all against a talented visiting Gunners outfit, but fell to a 3-1 loss courtesy of clinical finishes from Omari Hutchinson (two) and Khayon Edwards in either half.

Divin Mubama pulled one back for the Hammers with five minutes remaining at Rush Green Stadium, but the chances of a comeback remained slim after defender Jamal Baptiste had been sent off moments beforehand for a professional foul in the build-up to Hutchinson’s second goal.

West Ham could take heart from promising spells at the end of both halves, with half-chances coming and going the team in Claret and Blue, but they were ultimately picked off on the break as they sought a route back into the match.

“I felt it was a really high-quality game,” Keen told whufc.com. “We hung in there first half – I thought Arsenal played some really quality football – but we dug in and had a real go.

“Unfortunately, we went 1-0 down but then, towards the end of the first half, I thought we had a couple of little openings. Those were the kind of chances we needed to take to get back on level terms, and if we had, the second half could’ve been different.

“The boys gave a fantastic effort and really gave it their all, we just came up a little bit short tonight. Full credit to Arsenal tonight. I just told their coach that I thought they had some really good, quality players.

“Our analysts pointed out that Arsenal had one shot in the first half, and it was the one Hutchinson put just inside the post. It was a fantastic finish.

“As much as they had quite a lot of possession, they didn’t really have that many chances, but we had two or three openings ourselves. Was that the difference? I don’t know. I think overall Arsenal had a little bit more quality.

“We just came up a little bit short, which is disappointing, but the boys will learn from it, especially when you see that we had five first-year scholars playing as well as some U16s. They’ll benefit from it next year certainly.

“I thought our effort, our desire, and our willingness to work for the badge was fantastic, we just came up a little bit short tonight – but we’ll go again.”

Despite the disappointment of the defeat, the FA Youth Cup has served up some memorable moments for the West Ham youth team this season.

A first third-round victory in eight years – a penalty shoot-out win over Luton Town at Kenilworth Road in December, following a 3-3 draw – was swiftly followed by a first fourth-round win in nine – a comprehensive 5-0 win over Norwich City U18s at Carrow Road last month.

Both games showed different sides to Keen’s young charges, and the lead coach feels that – with the benefit of such experiences – they will develop into better players for them.

Keen explained: “I just said to them in the changing room that the Luton game was a freak game, where they ended up winning on penalties, and the Norwich game was near-perfect for a youth team performance.

“They came here tonight and had a fantastic experience, even though we were on the wrong end of the result.

“There’s so much to take from it, especially for the first-year scholars and U16s. Divin Mubama’s come on and scored in the Youth Cup as an U16 player, and I don’t think there’ll be too many U16s scoring in this competition.

“Full credit to them – I don’t think they let the Club down, I think they just came up a little bit short tonight.”

West Ham United U18s will now look to finish their 2020/21 U18 Premier League South campaign strongly, with four games remaining and a finish as high as seventh in the table still feasible.

In the U18s, we’re going to have a young team for the rest of the season, and it’ll be about their experience

The run-in to their season continues next Tuesday afternoon with a trip to the Tottenham Hotspur Training Ground.

Simultaneously, a number of players who featured in the youth team on Friday night will be involved with the U23s’ league season run-in, having pushed up into development squad football as part of the Academy’s commitment to challenging its brightest young prospects.

“It would be great to finish strongly,” Keen added.

“I think quite a few of the lads who played tonight will be playing for the U23s for the rest of the season – that’s the area where we’ve got to try and stay in the Premier League 2 Division 1, which is a really strong competition – a fantastic league. Quite a few of the lads like Kai, Freddie and Jamal have been playing in that regularly.

“In the U18s, we’re going to have a young team for the rest of the season, and it’ll be about their experience, but like we did on Saturday at Little Heath, we want to go and win some games.

“We beat Reading [4-1] with a fantastic performance on Saturday, and I want us to go and do that again. It’ll be tough – Tottenham away on Tuesday – because they’ve got some good players, but as long as we have a go, and represent the Club and the badge in the correct manner, then I’ll be happy.”