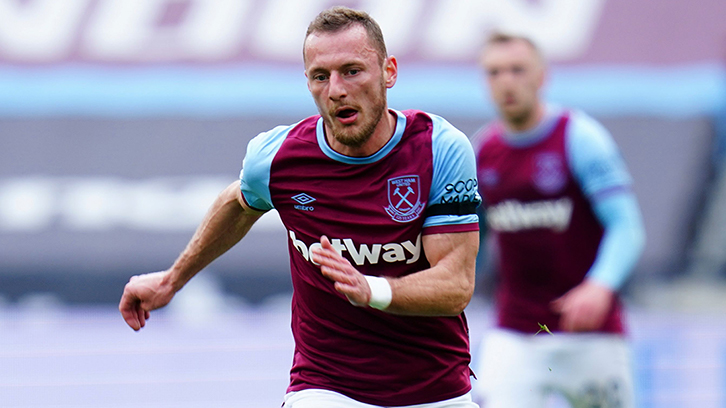 West Ham United defender Vladimír Coufal has been impressed with the collective desire of the Club since making the switch to east London earlier in the season.

The full-back joined the Hammers from Slavia Prague in early October and set about making an irrefutable impression on his new team-mates and supporters alike, with a strong debut in the 3-0 win away at Leicester City proving a sign of things to come.

Coufal and his countryman Tomáš Souček have certainly been taken into West Ham United hearts far and wide, playing a key part in the Irons’ impressive form which has led to a sustained push for a high-ranking finish in the Premier League.

Speaking of their influence, David Moyes recently said: “Tomáš and Vladimír Coufal have both brought something else to the Club: complete humility. They’re happy to be here, driving it on.”

Yet Coufal has himself been impressed with the drive shown by the collective squad this campaign, attributing the side’s success to their willingness to put in the extra hours at Rush Green training ground.

West Ham’s No5 could make his 30th appearance in Claret and Blue at the weekend, as his side seek to maintain their excellent top-flight form when they travel to Newcastle United’s St James’ Park on Saturday afternoon.

That, Coufal believes, is down to West Ham's mentality.

Coufal explained: “I was really surprised by how the guys here keep training after the session ends, because I was used to, after a session, going back to the changing room or playing with the guys games like football tennis or something.

“Here, the guys make sure that they stay on the pitch or keep improving their finishing or crossing.

“I think our winning mentality is rising match-by-match and we know that it’s important to keep going and keep improving.”

Lingard is Premier League Player of the Month

Antonio: We want to finish the season on a high