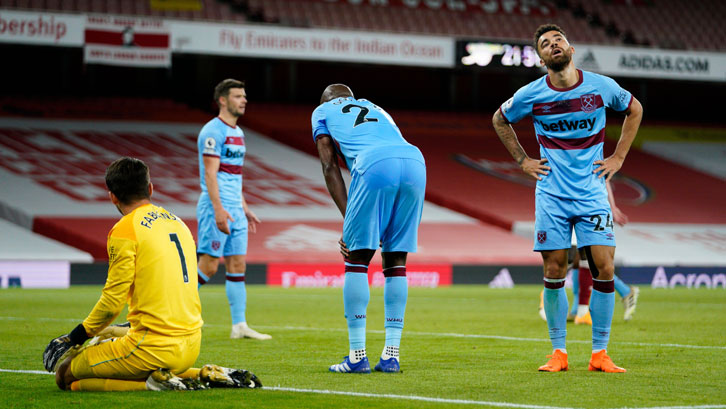 Despite creating twice as many goal attempts as the Gunners, the Irons were left to rue an inability to turn dangerous positions and chances into goals and, just as they did before the COVID-19 lockdown in March, departed north London with nothing.

Arsenal had just three shots on target and scored from two of them – Alexandre Lacazette scoring with their first meaningful attempt and substitute Eddie Nketiah winning it with five minutes to play – while West Ham repeatedly tested Bernd Leno and his defenders, but had just Michail Antonio’s equaliser on the stroke of half-time to show for it.

There could and probably should have been a different outcome.

Eager to put the disappointment of their opening-day defeat by Newcastle United behind them, the Hammers made a bright start under the Emirates Stadium floodlights.

The visitors could have been ahead inside five minutes, but Angelo Ogbonna stooped to nod straight at Leno from six yard out, when arguably a volley would have served the Italian better.

With Arsenal struggling to find any sort of rhythm, the Irons continued to work their way into dangerous positions.

After Declan Rice had seen a free-kick deflected wide and Antonio’s cross-shot had been saved by Leno low to the goalkeeper’s left, Bowen went down under a challenge from Arsenal’s summer signing Gabriel inside the penalty area, but neither Michael Oliver nor VAR official Chris Kavanagh deemed it a foul.

Having created nothing in the opening 25 minutes, Arsenal then scored with their first chance. Pierre-Emerick Aubameyang beat the offside trap and crossed for the unmarked Lacazette, who headed into the roof of the net from eight yards.

After taking the lead, the home side enjoyed a brief period in the ascendancy but, after Bukayo Saka had curled a shot over, West Ham went back on the offensive and had another penalty appeal turned down after Gabriel appeared to handle Tomas Soucek’s header.

Moyes’ men final got the goal their play warranted in the final minute of the first half, and a superb team goal it was, too.

Pablo Fornals collected a high ball on the left and found Arthur Masuaku. The DR Congo man touched it left for Soucek, who did likewise for Bowen. The No20 released the overlapping Ryan Fredericks, whose low cross was swept in by Antonio. The goal took the No30 joint-fourth on West Ham's all-time Premier League goalscorers' list with Trevor Sinclair, and also saw him become the first Hammer since Frederic Kanoute nearly 20 years ago to score in four straight Premier League away games. 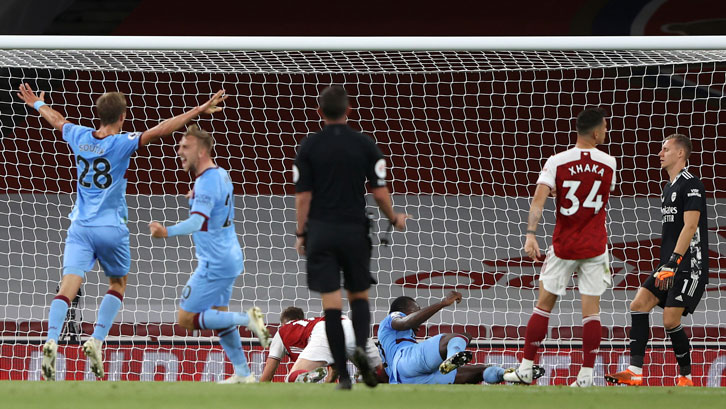 Back on level terms, West Ham were arguably even better after the break, but just could not find the winning goal their enterprising football could easily have led to.

Masuaku fired a long-range shot over before the same player delivered an outstanding cross from deep on the left. Gabriel dived in front of Antonio and the ball rather hit the West Ham forward, allowing Leno to sprawl to his left and stop it crossing the line.

With confidence growing, the chances continued to flow, with Bowen and Antonio both seeing shots blocked by former Lille man Gabriel.

Antonio then went even closer, heading Masuaku’s hanging cross against the crossbar. Leno then dropped the high ball, Antonio saw his shot blocked again and Leno got in the way of Bowen’s follow-up.

And, just as happened in the first half, West Ham were made to pay for their inability to turn chances into goals.

Just five minutes were left on the clock when Dani Ceballos got away from substitute Andriy Yarmolenko and squared for Arsenal replacement Nketiah to tap into the empty net.

Moyes sent on Sebastien Haller and Felipe Anderson in search of a late leveller, but to no avail.