Harrison Ashby: My West Ham debut was the best night of my life by far!

The 18-year-old right-back caught the eye of manager David Moyes in action for the Hammers’ development side in Premier League 2 and the EFL Trophy.

And his reward was a substitute appearance at London Stadium, where he helped the Irons see out a comfortable victory and could even have recorded an assist with his very first touch, only for his dangerous cross to flash across the face of the Charlton goal.

“It feels unreal, to be honest,” the Scotland U19 international told West Ham TV. “I know there aren’t any fans here, but the feeling of just going on the pitch was just unreal. It was so good!

“It’s nice just coming on and keeping it steady and feeling confident. I just hope I can keep doing what I’m doing and break into the squad.

“I don’t know if I should have shot or not with my first touch, but I’ll have a look on the video! You’ve just got to put the ball in an area and hope someone is there.

“It’s the best night of my life by far! One hundred per cent!” 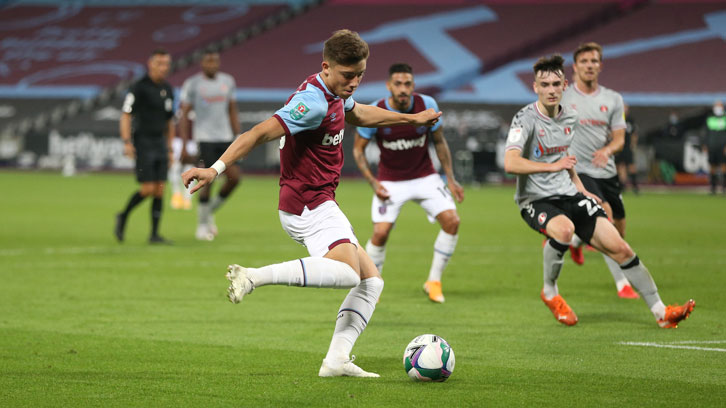 Unfortunately, COVID-19 restrictions meant his parents and the West Ham supporters were unable to attend and witness his big moment, so Ashby is hoping Tuesday’s debut was just the start of a long and successful career in Claret and Blue.

“It will be unreal when the fans are back in and hopefully I can get another game and my parents can be here to watch,” he confirmed. “They’ve been pushing me ever since I was young, taking me from school and sitting in traffic for two hours [on the way to training], then getting home at eleven o’clock at night and doing the same thing every day, so it would be nice to do them proud.”

Ashby, who has made just six appearances at development level – four in Premier League 2 Division 2 and two in the EFL Trophy – has been with the Academy of Football since the age of nine, and is hugely grateful for the coaching, advice and support he has received throughout his young career.

“I want to thank Dmitri Halajko and Steve Potts for putting their trust in me to come in the 23s, Kevin Keen and especially Mark Phillips who has been pushing me since I was 15,” he said. “All of them have pushed me as hard as they can and it’s paid off.

“The manager is putting his trust in young players which is obviously very good for myself and other players around the team and it’s nice going with the first team and them welcoming you really well. It’s a good environment to be in.”