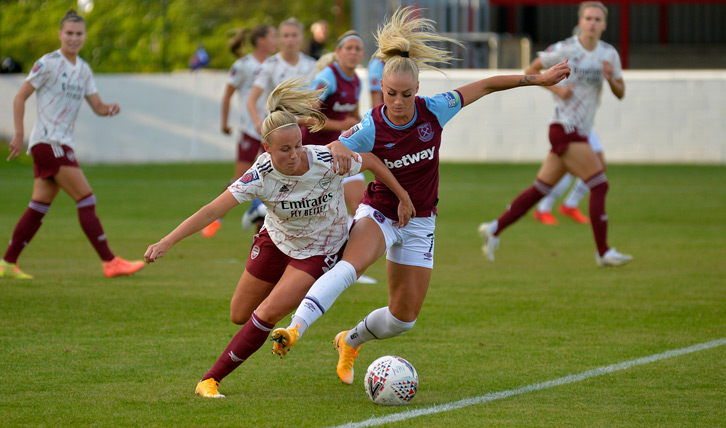 West Ham United suffered a heavy defeat at home to Arsenal in their first home match of the season.

A first game at Dagenham & Redbridge Stadium, in front of fans for the first time since February, was the setting for the Hammers’ opening home match of the Barclays FA Women’s Super League season.

It started well for the Irons too, as Adriana Leon drew the first ripple of applause from supporters after forcing Manuela Zinsberger into a low save.

Mackenzie Arnold then got a huge ovation from the home fans after making a terrific instinctive save to deny Miedema, after her shot took a wicked deflection off of Laura Vetterlein.

The fire in the home side was clear, with Rachel Daly and Grace Fisk getting shown yellow cards early on, before captain Gilly Flaherty joined in the referee’s book.

Arsenal took the lead on 23 minutes as Roord netted on the half-volley, but the Irons hit back less than five minutes later for the second time in as many weeks. Kenza Dali collected the ball on the edge of the area and hit a superb strike in the bottom corner.

Arnold then followed up her terrific saves earlier in the half with a double-stop from other planet, denying Beth Mead one-on-one from six yards before stopping Jordan Nobbs from tucking home the rebound.

There was no stopping Arsenal’s second though, as Miedema tucked home from close range. The ball looked offside, and, in the aftermath, captain Flaherty was shown a second yellow card and sent off.

Arsenal would add another two goals before the end of the half through Little and Mead, giving the Hammers a mountain to climb in the second period.

Roord would complete her hat-trick, while Miedema would strike again, before Leah Williamson and Caitlin Foord also netted to compound a difficult afternoon for the Irons.