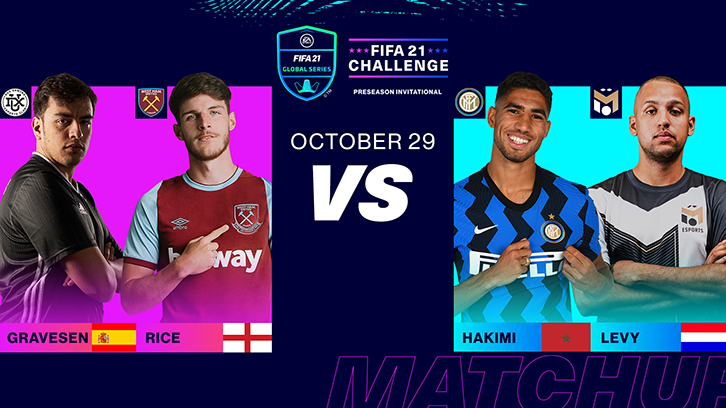 West Ham United midfielder Declan Rice will be picking up the PlayStation controller once more as he participates in the FIFA Global Series 21 Challenge on Thursday evening.

The 21-year-old Hammer, renowned for his prowess on the virtual pitch, is helping to launch the FIFA 21 competitive season – in which three West Ham Esports players will participate – with an opening mini-tournament.

Watch the #FIFA21 Challenge on October 29 at 6PM ⏰ UK 🇬🇧 on Twitch and YouTube! pic.twitter.com/kd5oIQ3Hlo

Rice is partnered with Jaime ‘Gravesen’ Alvarez, who represents Real Zaragoza Esports and is considered by many to be Spain’s top FIFA 21 player.

The duo will kick-off their campaign by taking on the duo of Hakimi and Levy ‘Levy’  Frederique, who represents FC Groningen Esports in Holland.

Ties will be two-legged affairs, with professional footballers duking out the first legs before professional Esporters take over for the second – and extra-time and penalties, if required.

The tournament kicks off at 6pm UK time on Thursday, live on the official EA SPORTS FIFA account, with Rice’s first game anticipated to take place shortly after 7pm.

One of Rice’s last appearances on a FIFA title was over the lockdown period, when he led West Ham United to a 3-2 win over Mason Mount and Chelsea in a friendly win on FIFA 20.

Want to step up your FIFA game? Watch our pros in action every week - subscribe to Twitch to learn when they go live.

Test your Fantasy Premier League skills in our league!