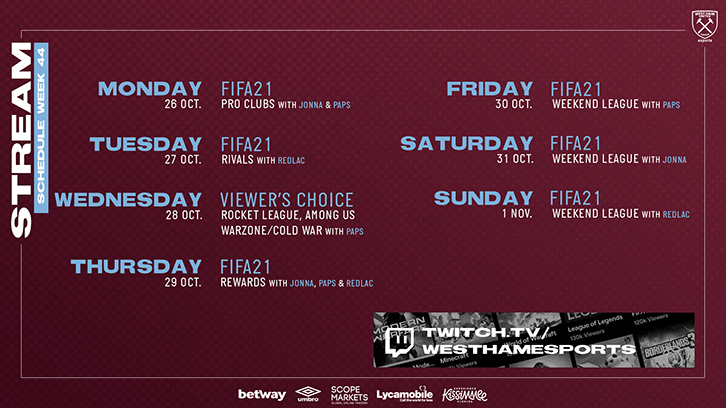 West Ham United’s Esports stars are going live on Twitch each and every week – and the schedule above shows when you can join them.

For alerts on when the players go live, make sure to subscribe to the West Ham Esports Twitch channel.

While all three prepare for the FIFA 21 competitive season, which kicks off in November, the schedule is predominantly based on EA SPORTS’ premier footballing title at present.

This is set to evolve on a weekly basis, however, with ‘Viewer’s Choice’ slots seeing you vote on our Twitter and Instagram channels as to which titles they’ll come up against.

These let you put your favourite Hammer up against your favourite game – for example, last week, Jonna played his first ever game of popular murder mystery title, Among Us!

This week, on Monday, Jonna and Paps will team up to stream Pro Clubs, playing their part in a West Ham-themed side against online opponents and talking all things FIFA 21, while answering your questions from the Twitch chat.

Thursday sees all three players open their world-class Weekend League rewards, with some elite packs and players guaranteed, before the trio take turns to stream their next Weekend League matches over the course of Friday, Saturday and Sunday.

Want to step up your game? Watch our pros in action every week - subscribe to Twitch to learn when they go live.

Test your Fantasy Premier League skills in our league!