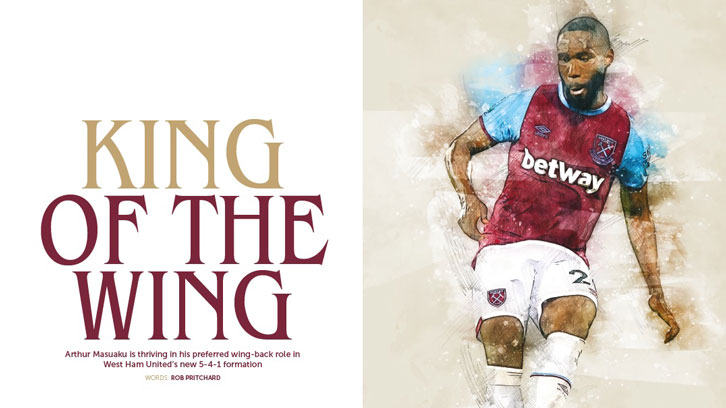 You can order copies of the Official Programme for the visit of Pep Guardiola's team now for just £3.50, plus £1.49 postage and packaging*. Copies will be sent via first-class post. Full-season subscriptions are also available, including all Premier League, FA Cup and Carabao Cup home issues, from just £108.

With fixtures being played without supporters present due to COVID-19 pandemic guidelines, Saturday's 12.30pm kick-off will be broadcast live in the UK by BT Sport and across the world by the Premier League's international broadcast partners.

To help fans everywhere enjoy the matchday experience, we are also making a digital issue of the Official Programme, complete with enhanced video content, available FREE of charge. Click here to start reading your issue now!

Buy your Official Programme I Get your FREE digital issue

In Saturday's issue, cover star Arthur Masuaku discusses the Hammers' recent form, his enjoyment of the left wing-back role and the need to talk to combat mental health issues.

1994 Hammer of the Year and former West Ham and City striker Trevor Morley looks back on his favourite Claret and Blue moments, while ex-City and Irons defender and one-time City manager and current Hammers first-team coach Stuart Pearce picks his Dream Teammates.

As the world marks Black History Month and the Premier League says there is No Room For Racism, Ken Dyer speaks to Sir Trevor Brooking about the impact made by West Ham's first black players and the need for more BAME coaches to be employed in the game, while first-team coach Paul Nevin shares his experiences and looks back on his unique rise through the coaching ranks.

You can meet West Ham's newly-assembled Esports team, find out more about visitors Manchester City and keep up to date with the latest stats.

Columnist Mark Webster heads down the Added Time Tunnel, Irons legend Tony Cottee shares his thoughts on the miraculous comeback at Tottenham Hotspur, and we continue to look back through the Club's 125th history.

With columns penned by manager David Moyes and captain Mark Noble, plus exclusive interviews and features from the Academy of Football, West Ham United’s women and the Club’s award-winning Foundation, there is content for everyone in the Official Programme!

Redeem your Club Cash this Black Friday and get an extra 10% reward!