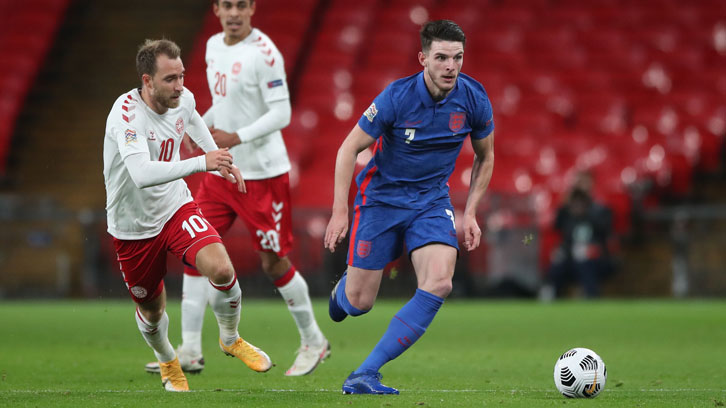 It was a disappointing Wednesday evening for West Ham United’s international players in the UEFA Nations League.

Declan Rice, Darren Randolph, Tomáš Souček and Vladimír Coufal were all on the losing side for their respective countries.

Rice started and played for 70 minutes as England suffered a 1-0 League A Group 2 defeat by Denmark at Wembley.

Earning his eleventh cap, Rice impressed with another assured display in a deep-lying midfield position, but Harry Maguire’s first half sending-off and Christian Eriksen’s penalty a short time later put England on the back foot.

Rice did his best to help England’s search for an equaliser in the second half, but when Mason Mount met his header back across goal with a powerful header of his own, Kasper Schmeichel produced a fine save to keep the ball out.

England are now third in their group on seven points, behind Denmark on goal difference and two points behind Belgium, who won in Iceland, with two rounds of matches to play in November.

In Helsinki, Randolph and Republic of Ireland were also beaten 1-0, by Finland in League B Group 4.

Ireland remain without a win after four matches, with just two points, and are in danger of being relegated if their form does not improve in their final two fixtures against Wales and Bulgaria next month.

In League B Group 2, Souček and Coufal both started and played the full 90 minutes at Hampden Park, but were unable to prevent Czech Republic falling to a 1-0 defeat by Scotland.

The reverse leaves the Czechs second in the table, four points behind their conquerors with two matches left to play, both at home, to Israel and Slovakia.

Elsewhere, Łukasz Fabiański was an unused substitute as Poland beat Bosnia and Herzegovina 3-0 in Wrocław – a victory which puts the Poles top of League 1 Group A with a trip to Italy and home game with the Netherlands to come. The Italians and Dutch drew 1-1 in Bergamo on Wednesday, but Angelo Ogbonna was not involved.