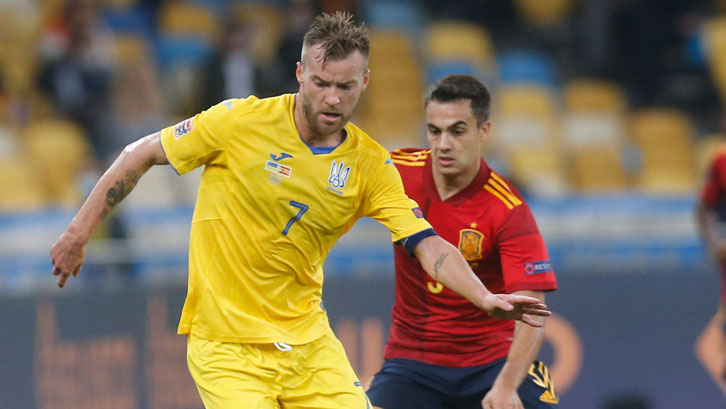 The West Ham United forward sent Viktor Tsyhankov clear to score the only goal of the game in Kiev, closing the gap on the League A Group 4 leaders to just a single point with two rounds of matches still to play.

Spain had 21 shots to Ukraine’s two, but Tsyhankov’s smart early shot caught out David de Gea and secured an unlikely victory for the home side.
Yarmolenko’s assist was his 21st for Ukraine and came on his 91st appearance for his country.

About 15,000 fans were allowed in to watch the game at the Olympic Stadium, where Ukraine goalkeeper Georgi Bushchan was in unbeatable form.

Ukraine complete their Nations League group-stage fixtures in November with away ties in Germany and Switzerland, where victories could see them top the group and qualify for the Finals, which will be held in October 2021.

Fabian Balbuena was also in action for Paraguay later on Wednesday evening, playing for the final few minutes as a substitute in his country's 1-0 2022 FIFA World Cup qualifying win in Venezuela. Gastón Giménez of MLS club Chicago Fire netted the only goal of the game five minutes from full-time.

Paraguay drew 2-2 with Peru at home in their opening qualifier and, after two rounds, sit fourth in South American qualifying table below Brazil, Argentina and Colombia.

Angelo Ogbonna, Declan Rice, Tomas Soucek, Vladimir Coufal and Darren Randolph could all be in international action on Wednesday.