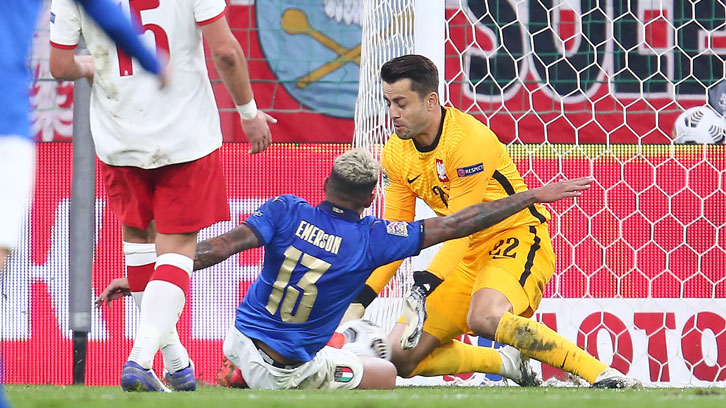 Łukasz Fabiański has now kept more clean sheets for Poland than any other goalkeeper in the country’s history.

West Ham United’s No1 made it 26 clean sheets in 53 appearances when he kept Italy at bay during Sunday’s UEFA Nations League 1 Group A fixture in Gdansk.

Fabiański’s shutout against the Azzurri took him ahead of Józef Wandzik, who kept 25 clean sheets in 52 caps between 1985 and 1995.

The 34-year-old would surely have set the record sooner had he not been part of a golden era of Polish goalkeepers, first having to play backup to his friend Artur Boruc, who kept 24 clean sheets in 65 caps between 2004-17, and then battling for a starting place with long-time rival and contemporary Wojciech Szczęsny, who has shut the opposition out 21 times in 47 appearances since 2009.

The Hammers’ first clean sheet for his country came on his fourth appearance and second start, in a 4-0 friendly international victory over Estonia in February 2007.

The experienced stopper marked his major tournament debut by keeping Germany at bay in a goalless group-stage draw at UEFA Euro 2016, and he repeated the feat by shutting out Japan on his sole appearance at the 2018 FIFA World Cup finals.

In addition to his 26 shutouts for Poland, Fabiański has kept 107 clean sheets in 474 appearances at club level, including 15 in 93 games for the Irons.

Everyone at West Ham United would like to congratulate Łukasz on setting the new record for national-team clean sheets for Poland.