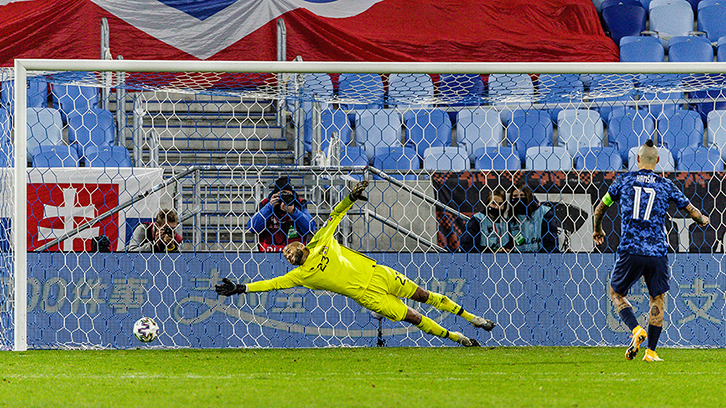 On his 45th appearance for the Boys in Green, the Hammers’ shot-stopper faced only three shots on target over the course of 120 minutes at the Tehelné Pole in Bratislava, one of which was a spectacular save prior to half-time from a break led by Ondrej Duda.

Having weathered the storm, the Republic of Ireland came out and arguably had the better of the chances in the remainder of the semi-final contest, only to struggle to find a breakthrough.

When it boiled down to spot-kicks, Randolph came close to stopping two of Slovakia’s spot-kicks, guessing the right way but being beaten by the sheer force of both Marek Hamsik and Lukas Haraslin’s strikes.

Slovakia would ultimately convert all four of their penalties however, and with Alan Browne and Matt Doherty missing their kicks, the Republic of Ireland's qualification campaign ended in disappointing circumstances on Wednesday evening.

Meanwhile, at Wembley, Declan Rice was an unused substitute in England’s 3-0 international friendly win over Wales.

Prior to the match, tributes were paid to honour footballing legends – former players and faithful fans alike – who have passed away in the last year, including West Ham United’s very own Martin Peters MBE.

The legendary Hammer and 1966 World Cup winner sadly passed away in December following a long and courageous battle with illness.

Peters, along with his late friend Bobby Moore and hat-trick hero Sir Geoff Hurst, stand eternal as West Ham United’s three proudest sons – homegrown Academy graduates who led the Hammers to European glory in the mid 1960s and then England to world dominance.

To pay tribute to the beloved Peters and his compatriots, players from both sides wore black, a video montage – which you can watch below – was displayed before the match, and a minute’s applause was enacted prior to kick-off.

It's been 11 months since we were last at home. Tonight we pay tribute to members of the England family who we've lost in that time – former players and faithful fans alike. pic.twitter.com/6ArpE6f9Tb

The events of match saw Rice watch on as Gareth Southgate deployed a much-changed England side, with all three goalscorers – Dominic Calvert-Lewin, Conor Coady and Danny Ings – scoring their maiden strikes for the Three Lions.

Rice will now hope to feature in England’s two forthcoming Nations League A Group 2 fixtures: against Belgium at Wembley Stadium on Sunday, and then against Denmark at the same venue next Wednesday.