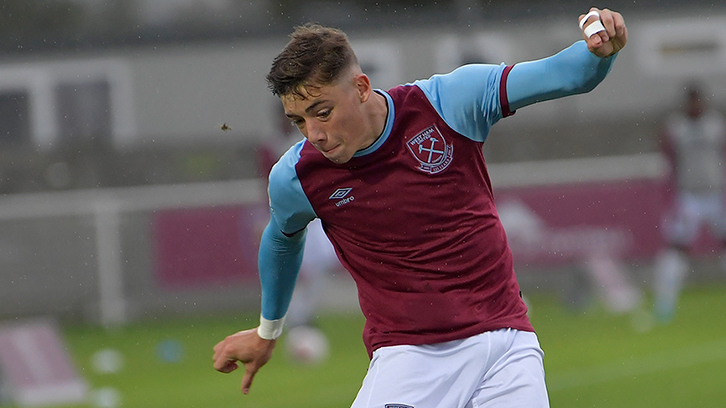 In development football, every result is one to be learned from – regardless of whether it be an impressive victory or a hard-fought defeat.

After a week in which West Ham United’s development squad dominated the ball to beat Colchester United 1-0 in the EFL Trophy, a similarly imposing performance unfurled against Brighton & Hove Albion in Premier League 2 – only for a late goal to see the Irons slip to a 3-2 loss.

For right-back Harrison Ashby – a constant menace down the right flank against the Seagulls – the frustration of seeing his side lose another game they did not truly deserve to gives extra cause to reflect.

The Hammers were good value for the 2-1 lead they almost took into half-time, fighting back from an early goal to lead through Mesaque Dju – assisted with a fine low cross by Ashby – and Conor Coventry from the penalty spot.

A series of ricochets from a Brighton set-piece brought the visitors level before half-time in desperately unlucky circumstances, before a long ball over the top led to Jose Izquierdo lobbing home the Seagulls’ winner in the 87th minute at Rush Green Stadium.

Ashby explained: “It’s just one of those where you’ve got to reflect on what you’re doing wrong and go back, watch the game, see what we can improve on and try and do better the next week.

“Going forwards, through the middle and down the sides, in my opinion we’re one of the best teams in the league – it’s just the little bits we need to iron out and as soon as we can do that, we’ll be fine.

“It’s just the little finishing touches we miss. It’ll come. As soon as the boys are together again, it’ll come.”

A combination of factors have seen the young Hammers pick up just one point in Premier League 2, despite enjoying arguably the better of the play in all four of their games so far this season.

Ashby therefore took time to praise his teammates' mentality in continuing to perform well, even in luckless defeat.

The full-back also recognises that, having enjoyed his own breakthrough at first-team level this season in the Carabao Cup, the development squad are playing for equivalent potential opportunities in the future.

“All the boys, every game, are up for it,” he told whufc.com. “Even when the result the week before hasn’t been great, all of us go out and want to win every week.

“At the moment, it’s just not falling for us – we’re scoring more goals, but we keep letting in silly ones, so we need to keep scoring, get rid of the mistakes, and we’ll be fine.

“It’s good motivation when the first-team staff come to watch us because you want to impress. It’s good for us because we get to show them what we can do. With games like today, it’s just the silly bits we need to cut out, and we’ll be fine.”

A two-week block of international fixtures will now ensue – during which time 18-year-old Ashby could make his debut for Scotland at Under-21s level – before the Irons’ next Premier League 2 fixture at home to Blackburn Rovers on Friday 23 October.

“I think, to be honest, we’ll come back from it flying,” Ashby reaffirmed.

“I think the boys will work hard in training, but also rest up and come back fresher, and we will charge out of the blocks when we get back. We all just hope the international break goes well and we’re confident in ourselves we’ll be fine.”