Yarmolenko and Souček in international action 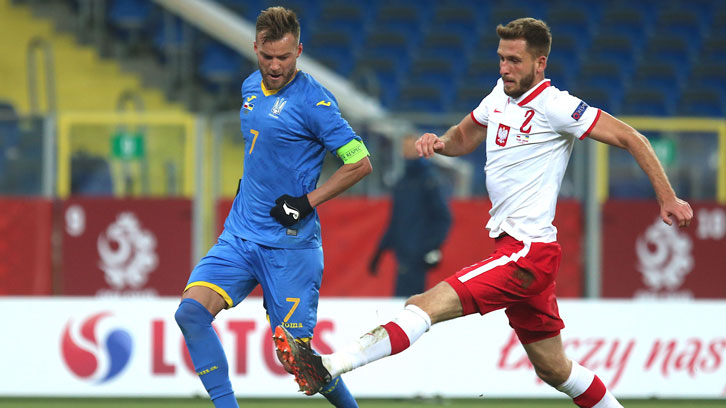 Yarmolenko won but then missed a penalty as Ukraine were beaten 2-0 in Poland, while Souček was introduced as a half-time substitute in Czech Republic’s 1-0 defeat in Germany.

The West Ham United forward was brought down by Paweł Bochniewicz eleven minutes into the match in Łódź, only to step up and smash his spot-kick against the base of the right-hand post with goalkeeper Łukasz Skorupski beaten.

Poland, for whom Lukasz Fabianski was an unused substitute, made full use of that let-off to score either side of half-time through goals from Krzysztof Piątek and Jakub Moder.

Yarmolenko and Ukraine now head to Germany for their penultimate UEFA Nations League A4 tie in Leipzig on Saturday 14 November, before travelling to Lucerne to face Switzerland on Tuesday 17 November. Wins in both would see Ukraine win their group and qualify for the finals.

Fabianski could be recalled for League A1 ties with Italy in Reggio Emilia on Sunday 15 November and Netherlands in Chorzow on Wednesday 18 November. Poland are top of League A1 with seven points, a point ahead of Italy and two ahead of Netherlands.

Meanwhile, Souček was unable to help the Czechs avoid defeat in Leipzig, where his nation already trailed to Luca Waldschmidt’s 13th-minute goal when he replaced Filip Novak at the interval.

However, the Irons midfielder did have one of his country’s best opportunities to equalise in the second half, only for his powerful header to fly high and wide.

Fellow Hammer Vladimír Coufal was an unused substitute for Czech Republic at the RB Arena.

The pair now return to Nations League duty, with League B2 ties with Israel in Plzen on Sunday 15 November and Slovakia in Prague on Wednesday 18 November. Wins in both of those games could see the Czechs overhaul group leaders Scotland and win promotion to League A.