One thousand east Londoners went off to fight for their country between 1914-18 – and hundreds of them never came home. As we mark Remembrance Day, historian Elliott Taylor, the author of ‘Up The Hammers!: The West Ham Battalion in the Great War 1914-1918’, shares their heroic story...

As we mark Remembrance Day, every West Ham United fan should learn the story of the ‘West Ham Pals’, the Hammers-supporting soldiers who went off to fight for their country in the First World War.

In December 1914, a few months after the outbreak of hostilities, the Mayor of West Ham successfully applied to the War Office to raise an infantry unit of local men to serve in the British Army, who had by then already suffered heavy losses on the Western Front.

Formed as the 13th (Service) Battalion of the Essex Regiment, the West Ham Pals were born.

Volunteers, many of them West Ham United‘s first generation of supporters, flooded the recruiting offices around the East End and by late February the required 1,000 men had enlisted. They had no uniforms, no rifles and many had no military experience. However, they all wanted to ‘give a good smacking to the Germans’.

The Council soon applied for their cap badge to include two crossed hammers, in reference to their association with the Thames Ironworks and Shipbuilding Company, however this was refused. Nonetheless, the retained strong links with West Ham and the battle cry ‘Up The Hammers!’ was used throughout the war.

The battalion trained locally before progressing to Advanced Infantry Training on Salisbury Plain. Tragically, three of the volunteers were to be killed during this training, however, this did not deter their eagerness to meet the Germans on the field of battle.

After landing in France in December 1915, they would go on to fight the whole war alongside the 17th (Service) Battalion of the Middlesex Regiment, better known as the ‘Footballers’ Battalion’. Meanwhile, back in east London, the Reserve Companies played at the Boleyn Ground in an effort to encourage more local men to enlist.

The West Ham Battalion acquitted themselves very well on the battlefield and fought actions during the Battle of the Somme, at Vimy Ridge and Cambrai. Many Officers were awarded the Military Cross (one twice!) while many men from the ranks won the Military Medal and Distinguished Conduct Medal (second only to the Victoria Cross). 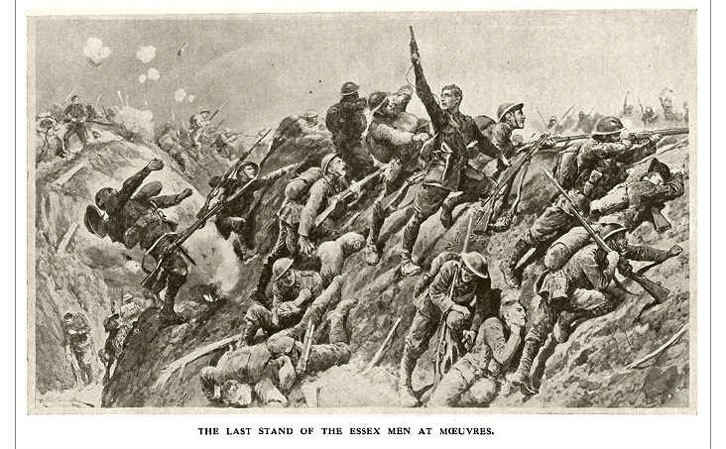 The Pals’ epic last stand at the Battle of Cambrai even made the front pages of many newspapers in late 1917. By the end of World War One, out of the original 1,000 men, roughly one quarter were killed, half were severely disabled from wounds and one quarter survived with their scars inside.

They never received a Victory Parade and, the West Ham Battalion was disbanded and relegated to history, but the people of the east London, and West Ham United, will never forget them.

A permanent memorial to their sacrifices can be found in the shape of a plaque at the entrance to the Stadium Store, which was originally unveiled by Elliott Taylor and Sir Trevor Brooking at the Boleyn Ground in 2009.

*For the full and fascinating story of the West Ham Pals, visit westhampals.blogspot.com