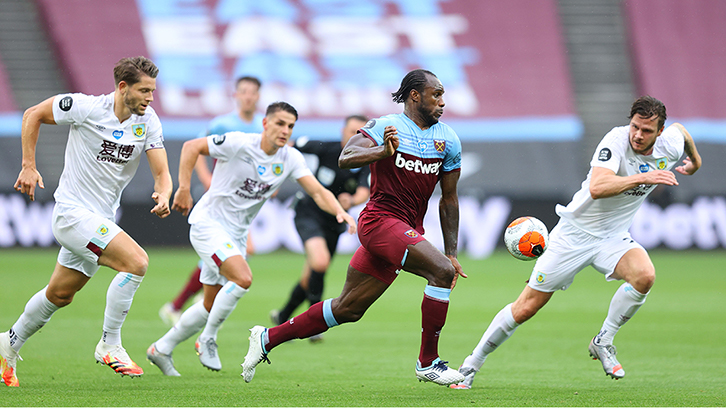 Jay Rodriguez's first-half effort was enough to settle a match of fine margins in Burnley's favour at a rain-soaked London Stadium.

In a match not short on energy, but ultimately devoid of that final moment of quality for West Ham, Rodriguez's contact with Charlie Taylor's cross in the 38th minute struck the woodwork before creeping in - largely indicative of a contest where the ball simply didn't seem to fall for those in a Claret and Blue shirt.

Having seen Andriy Yarmolenko make an impression as an impact substitute against Chelsea and Newcastle, manager David Moyes opted to start the Ukrainian against the Clarets, with Manuel Lanzini dropping to the bench.

The Irons were otherwise unchanged from the draw on Tyneside, but were boosted by the option of record signing Sebastien Haller on the bench, his first matchday squad since the season restart.

A combative opening to the match saw Tomas Soucek enjoy the first shooting opportunity after three minutes. Seeking his third Hammers goal in seven days, the Czech Republic international cut across the ball, but fired over from 30 yards.

It was the visitors who enjoyed by far the clearest chance in the opening exchanges. Taylor’s clipped ball in was well held up by Matej Vydra, whose lay-off picked out Erik Pieters just inside the area. Fortunately, however, the Dutchman was leaning back – and finished over the bar.

Seconds later, the first Hammers’ real glimpse at goal: after Nick Pope was unable to hold Aaron Cresswell’s deep free-kick, the ball sat up amidst a sea of bodies, but Soucek’s volley lacked the necessary purchase to pass Pope a second time.

Clear-cut chances were at a premium, a succession of crosses from the likes of Cresswell, Fredericks and Jarrod Bowen all cleared by a well-marshalled, tenacious Burnley defence.

Just before the 30-minute mark, the Irons’ first real chances arrived; the first saw Soucek react well to acrobatically volley another low Fredericks cross, but his improvised shot was too central and allowed Pope to deflect away with his legs.

Moments later, a powerful run from Michail Antonio, holding off a couple of Burnley players, created enough space to shoot hard and low from a tight angle. Pope again, however, got down low to stop the ball creeping in through his legs.

Shortly before half-time, Burnley led against the run of play. A well-placed cross from Taylor found Jay Rodriguez on the run across the area, and, glancing it off his shoulder, the ball hit the angle of post and upright – and, agonisingly, spun across Fabianski’s line.

The goal sparked the home team into life. Seconds after the restart, Antonio’s power saw him charge clean in on goal – but, under pressure from the trailing defenders, he opted against going across the goalkeeper, instead curling wide of Pope’s near post.

Chances were suddenly flowing, Vydra miscuing for Burnley when picked out over the top by a classy chipped pass, moments before Yarmolenko cut in from the right and forced Pope into a smart stop at his near post.

West Ham's 12 attempts to Burnley’s four in the first half showed that, while the Irons were lacking nothing in industry, the wall of white shirts which swarmed every Claret and Blue attacker were unlikely to give an inch easily.

But after the half-time whistle, it was Burnley who emerged with greater intent initially, Angelo Ogbonna doing well to get across and block from Vydra at the near post.

Despite showing plenty of intent, it would take something different to make for West Ham to make their own breakthrough and, seconds after Haller was sent on, the Frenchman almost found it.

Bustling his way through - with help from Antonio's presence - after a long throw, the No22’s low, placed shot drew yet another excellent save from the outstretched boot of Pope, turning it round the post.

When Pope’s legs weren’t in the way, a white shirt always seemed to be – Bowen’s jinking run inside and powerful the next effort unable to navigate past a crowd of bodies.

At the other end, West Ham were relieved to see Chris Wood drift inches offside before tapping in Phil Bardsley’s slide-rule cross, and they then owed much to Fabianski’s sharp reflexes to deny the New Zealand forward’s low strike across goal.

Moyes sent on Swiss forward Albian Ajeti for the closing stages and an aerial bombardment followed but, try as the Irons might, that Burnley defence just couldn't be bested on the night - West Ham's first Premier League defeat in three games a frustrating, gritty one.