The Irons ended a run of three top-flight games without a goal by defeating Chelsea 3-2, then followed that by creating 17 chances in Sunday’s 2-2 draw at Newcastle United.

Antonio, who scored in both games to double his personal tally for the season to four, believes the Hammers are benefitting from January signings Jarrod Bowen and Tomas Soucek settling into the team after the three-month break caused by the COVID-19 pandemic.

“It’s definitely encouraging because before the last two games we weren’t scoring goals,” he told West Ham TV. “Now we’ve shown that we can score goals, we need to start doing better at the back and we’ll start winning games.

“This season I don’t feel I’ve got enough goals, so it’s definitely good that I’ve got two in the last two games and hopefully I can keep that going until the end of the season.” 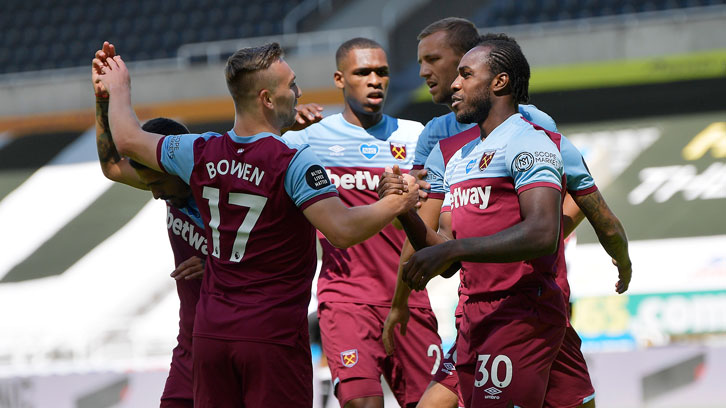 Reflecting on Sunday’s draw at St James’ Park, Antonio had mixed feelings about the result, having twice seen his team relinquish the lead and again fail to close out a game in which they held a winning position.

“The positive is that we got a point from the game, but the negative is that we feel we’ve dropped two points,” he admitted. “When we keep dropping points after taking the lead, we need to be more resilient.

“We need to try to keep the leads in the games because we’ve done it too many times this season. Now we’ve managed to show our attacking form and we are scoring goals, we need to shore up our back as well.

“We’re definitely a little bit disappointed because we feel like we’ve dropped two points because we created a lot of chances, but the positives are we got a point, we’re four points clear of the bottom three, three points clear of Watford and the games coming up give us a good opportunity to pull away.”

Another busy week for the Hammers sees David Moyes’ side host Burnley at London Stadium on Wednesday evening before traveling to Norwich City on Saturday.

When asked what the expectation is for those two fixtures, the typically positive Antonio was in no doubt – six points.

He confirmed: “The mindset for our next few games is that we want three points from each of them and that’s what we believe we can get.”