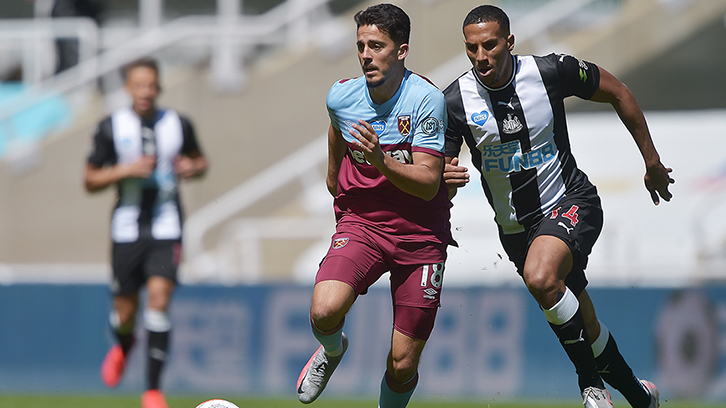 West Ham United twice took the lead against, but were twice pegged back by, Newcastle United at St James' Park on Sunday afternoon.

In an enthralling opening to the game, Michail Antonio played an impressive part in the move which led to him slamming home the opener from close range after four minutes, only for Miguel Almiron to level for the hosts ten minutes later.

The two teams created plenty of shooting opportunities but, with some impressive goalkeeping on display, it was only midway through the second half that further goals would follow, Tomas Soucek's controlled volley - his second West Ham goal in four days - cancelled out within a minute by Newcastle's Jonjo Shelvey.

As it was, with 17 shots - seven of which were on target - on Tyneside, the Irons were good value for all three points, although they ultimately had to settle for one against Steve Bruce's well-drilled Magpies.

Surging with confidence, the Irons got off to a flying start within four minutes: in a sweeping back-to-front move, Michail Antonio laid the ball off brilliantly to Pablo Fornals. The Spaniard found Jarrod Bowen on the right, whose low ball in – albeit quick – was misread by Newcastle skipper Jamaal Lascelles, rolling out to Antonio. Six yards out, the No30 – with time and space - couldn’t miss.

An open and entertaining affair saw Lukasz Fabianski make a smart save from Dwight Gayle five minutes later, the striker’s 25-yard free-kick creeping under the West Ham wall but, deflecting off a defensive boot, Fabianski was able to scramble across and save.

Antonio had a half-chance moments later, showing good athleticism to watch Rice’s lofted through ball all the way onto his foot – but, on the stretch, the No30 didn’t truly trouble Martin Dubravka in the Newcastle goal.

Newcastle equalised on the quarter-of-an-hour mark in similar fashion to the visitors' opener. Allan Saint-Maximin found Emil Krafth on the overlap, and the right-back’s first-time low cross to the near post found Miguel Almiron in space to slide in.

The home side’s tails were up, and they almost went ahead moments later, Jonjo Shelvey’s in-swinging corner sailing over a flurry of heads and bending within the far post – but Fabianski reacted smartly to parry away.

Bowen was proving a thorn in the Magpies’ side, and came close to restoring West Ham’s lead midway through the first half. Declan Rice played a sweeping ball to Aaron Cresswell, who set himself and hit a low shot into the area. Going wide, the ball was nevertheless almost perfect for Bowen, who was able to divert it goalwards – but Dubravka adjusted well to frustrate the Hammers with his legs.

West Ham were in the ascendancy as the half went on, showing some imaginative attacking play, but the closest they came following that was a glancing header from Bowen which was always heading wide.

Both teams’ commitment to going forwards continued following the restart, with Angelo Ogbonna in particular doing well to cut out Krafth’s threatening delivery moments after the whistle.

The Irons enjoyed a boost when captain Mark Noble – who missed Wednesday’s win against Chelsea – came off the substitutes’ bench with half an hour to go to make his 498th appearance for the Club, having shaken off a minor hamstring injury.

After such a relentless first half, it was perhaps of little surprise that the flow of chances slowed down after the half-time whistle, the action just as fast-paced – but ultimately less productive – in the second period.

Yet when a clear-cut chance finally arrived, Tomas Soucek was on hand to emphatically convert it. Declan Rice showed tremendous desire to reach Bowen’s corner at the far post, crashing a header against the bar. When the ball dropped down, Soucek demonstrated all his technical quality to volley it first-time into the bottom corner.

West Ham again were unable to hold onto their lead, Newcastle levelling just seconds later. Shelvey picked the ball up inside the ‘D’, passed into the feet of Gayle, followed his pass – and had plenty of time on the return to slot past Fabianski.

Neither side were able to build on that immediate exchange of goals, with West Ham's next chance arriving with ten minutes remaining. Andriy Yarmolenko - off the bench following a match-winning cameo against Chelsea - whipped in a flat cross which Soucek did well to dive on to but, angled away from goal, the midfielder was unable to generate enough power to unnerve Dubravka.

Then, Yarmolenko played a lovely flicked one-two with Soucek to create the space for a venomous 25-yard shot - this one wanting nothing in power, but just too close to Dubravka's reach, the Newcastle goalkeeper proving able to tip over.

West Ham pushed forwards but were ultimately forced to settle for a point in an entertaining contest at a sunny St James' Park, the result lifting Moyes' side four points clear of the Premier League relegation zone.