Tomáš Souček: Our Manchester United performance will still give us confidence

Tomáš Souček insists West Ham United will take confidence from the way they played for long periods against Manchester United on Saturday evening, despite ultimately losing the game 3-1.

The Hammers were outstanding for an hour at London Stadium and arguably should have gone in at half-time leading by more than just the Czech Republic midfielder’s close-range finish six minutes before the break.

Pablo Fornals, Jarrod Bowen and Sebastien Haller all went close to putting the Irons further in front, but missed opportunities cost them dear as Manchester United scored three goals in the final 25 minutes to snatch all three points.

Despite the disappointment of relinquishing a lead on home turf, Souček said West Ham would focus on the positives of their performance and take them into Friday’s away game at Leeds United and future matches.

It is also good for the next game for our confidence and spirit that we showed we can beat a team like Manchester United, so I hope that this game will give us much more confidence on the pitch

“We are disappointed because I think we should win because the first half was very good from us and we created many chances and we should have scored a second goal and made it 2-0, but in the second half, they deserved some points and they won,” said the No28.

“I think that Champions League teams like Manchester United showed us that we needed to score some goals from the many chances we had because they answered by creating chances too and scoring goals.

“I think we played really well [in the first half]. When I compared it with the last game against Aston Villa, we played much worse than today but we took three points, while today we took zero points, so it’s a bad feeling for us.

“But it is also good for the next game for our confidence and spirit that we showed we can beat a team like Manchester United, so I hope that this game will give us much more confidence on the pitch.” 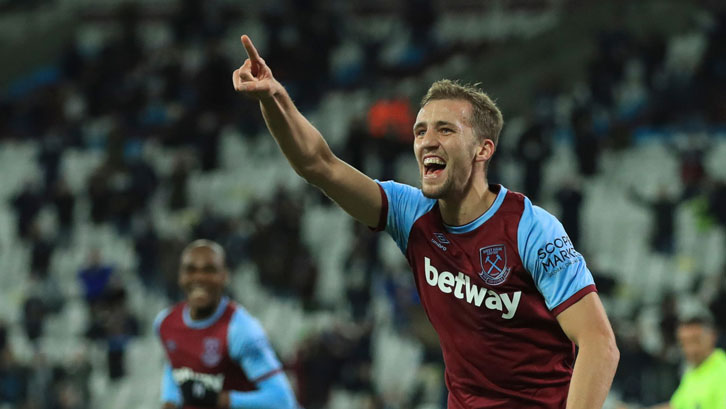 Reflecting on his goal, Souček confirmed that it was the result of a well-rehearsed training ground routine, with Declan Rice running to the near post and flicking on Aaron Cresswell’s corner, and the Czech himself attacking the far post to apply the finish.

“On Friday, we did a few corners and throw-ins and many set pieces and we knew that Dec would go to the first post and I would go to the second post, so it was like the training from Rush Green and it was a nice goal,” he explained.

“In my former team I scored many goals and I hope I score many goals here as well, so hopefully in the future I will, but conceding three goals is too much at home.” 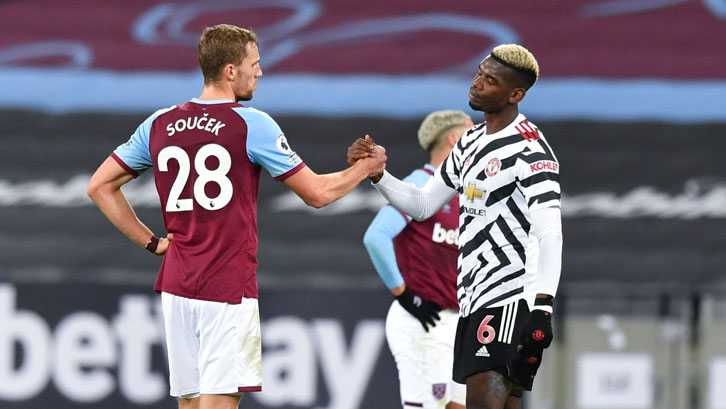 While the result was negative, Souček was quick to point to the positive impact made by the 2,000 West Ham fans who returned to London Stadium after a 280-day absence and roared their team on from well before kick-off until the final whistle.

“They were incredible from the start, from the warm-up and when we went to go to the pitch out of the tunnel it was nice,” he observed.

“It was only 2,000 supporters but it was incredible for us. I had my family here as well, so it was nice for me and for everyone and I hope the fans will increase in the next games.

“It seemed more like real football than the last nine months and I hope very quickly we can take steps to get many more fans at the stadium and we will get to fill the stadium a few times.”