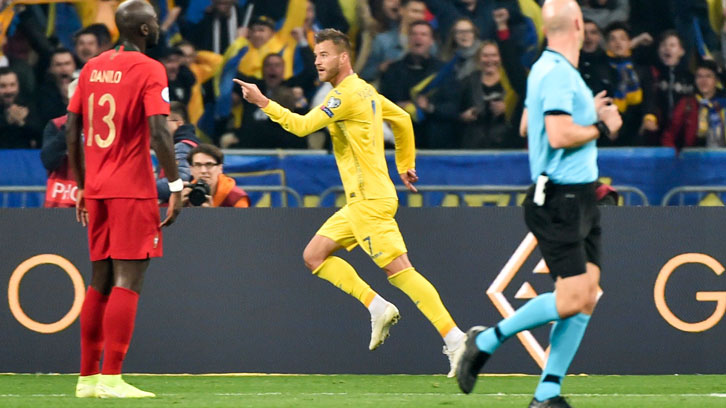 The goal, which was Yarmolenko’s 37th for his country on the occasion of his 83rd cap, came after 27 minutes and followed Roman Yaremchuk’s sixth-minute opener.

Ronaldo scored his customary goal from the penalty spot with 18 minutes remaining after Roman Stepanenko had been penalised for handball and sent-off for a second bookable offence.

The @WestHam man fires Ukraine 2-0 ahead against Portugal

However, the nation managed by Andriy Shevchenko – the only man to have scored more goals for Ukraine – held on to secure a famous victory over the reigning UEFA European Championship and UEFA Nations League winners at the Olimpiyskyi Stadium.

Three points took Ukraine onto 19 and eight points ahead of Portugal, who have just two games remaining, and confirmed them as Group B winners.

Ukraine and Yarmolenko complete their successful qualifying campaign in Serbia in November.

Elsewhere, Declan Rice was an unused substitute as England took themselves to the brink of qualifying from Group A with a thumping 6-0 win in Bulgaria.

Gareth Southgate’s side were full value for a convincing victory in Sofia, where the final margin could have been far larger had it not been for goalkeeper Plamen Iliev.

In the same group, Sead Haksabanovic was also an unused substitute for Montenegro in a 2-0 defeat in Kosovo.

England are top of Group A with five wins from six matches and 15 points, with the Czech Republic second on 12 and Kosovo third on eleven. All three nations have two games remaining in November, with England home to Montenegro and away to Kosovo, which the Czechs play at home to Kosovo and away to Bulgaria.