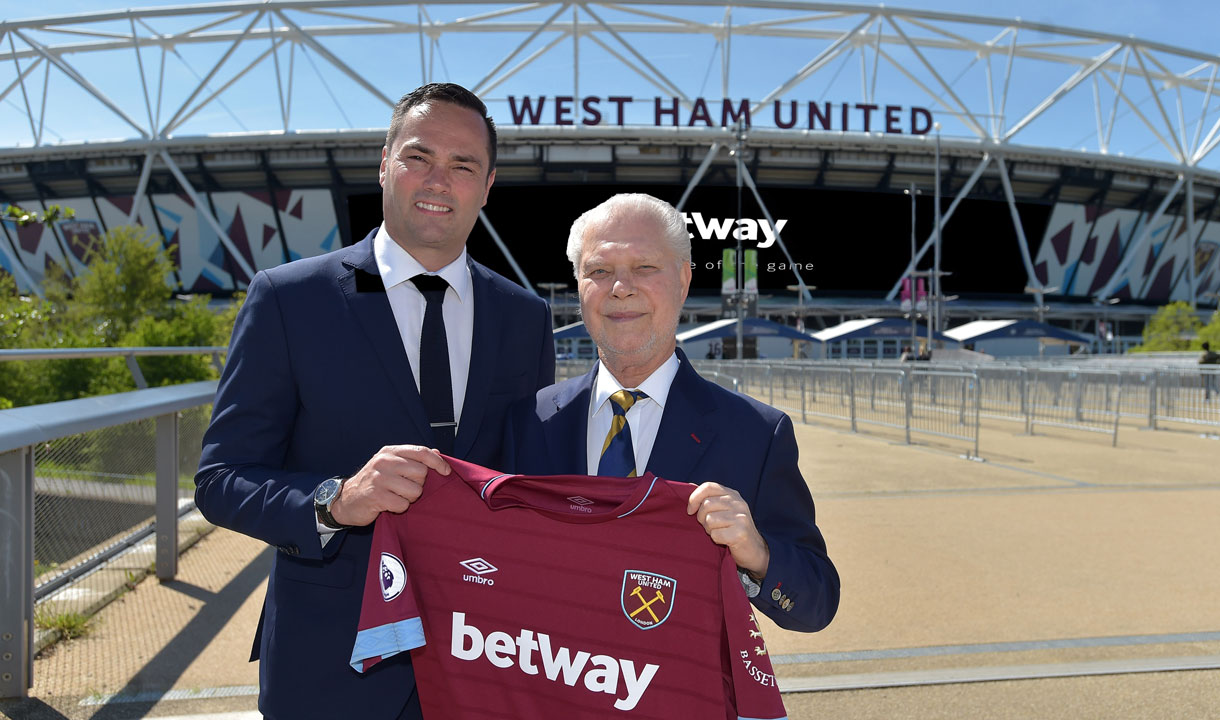 West Ham United is delighted to announce the largest partnership deal in its history, renewing the agreement with Betway as the Club’s principal partner.

Leading online bookmaker Betway has been the Hammers’ principal partner for four years, since 2015, and the ongoing success of the partnership has led to the new long-term deal being finalised.

In that time, the Club and Betway have worked hand-in-hand to bring supporters closer to their heroes, creating memories that will last a lifetime.

Initiatives like the Betway Academy, Betway Fan Taxi and West Ham Supermarket Sweep show Betway’s commitment to understanding the emotions and bonds that Hammers fans have with their Club, and this is something supporters can expect more of with the partnership extension.

Karren Brady, West Ham United Vice-Chairman, said: “We are delighted to once again extend our partnership with Betway. After working together successfully for four years, this is a new, long-term, record-breaking commercial deal for the Club, which shows the faith that Betway has in West Ham United and our iconic global identity which has seen us recognised as one of the world’s biggest football brands.

“We look forward to continuing to work with Betway as we embark on the next chapter for our great Club, and we will use this partnership as a platform for success, both on and off the pitch.”

Anthony Werkman, CEO of Betway, said: “Our partnership with West Ham United has been a huge success over the past four years and we are proud to be extending it by another six.

“They are a club with one of the most passionate fanbases in the game, who we have built up a strong relationship with by giving them some unforgettable experiences and memories.

“This is something we are wholly committed to and we are delighted to be continuing our partnership with the club.”

Karim Virani, Digital and Commercial Director at West Ham United, said: “We’re hugely excited to continue working with such a respected and responsible Principal Partner in Betway. Since the front of shirt sponsorship began, Betway has supported the Club in a whole range of ways, by giving their time and energy, as well as their investment.

“This has delivered some fantastic work for good causes around our local boroughs, as well as putting on a number of once-in-a-lifetime experiences for die-hard Hammers fans. Extending this partnership provides the opportunity for this great work to continue for the benefit of our supporters and our communities, which are the lifeblood of West Ham United.”

Paul Adkins, Marketing and Operation Director of Betway, said: “We signed our first deal with West Ham United in February 2015 at a historic time for the club with the upcoming move from Upton Park to the London Stadium.

“We then eagerly extended our deal with the club in August 2016 for a further three years, which was the largest sponsorship agreement in West Ham’s history, something we have been delighted to extend.”