Mark Noble: We want to put on a show for Premier League fans in China 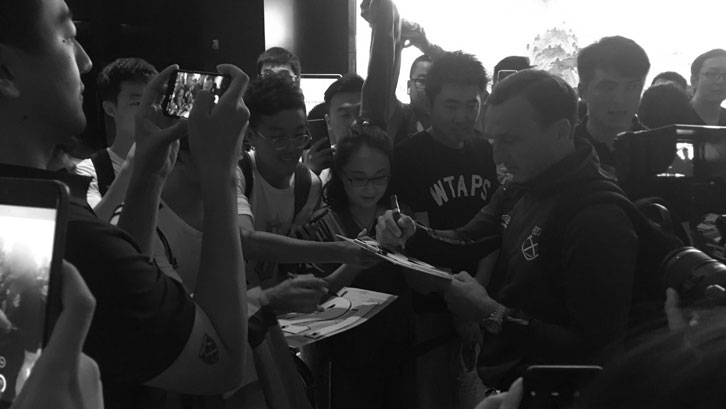 Mark Noble says every West Ham United player is looking forward to the experience of playing at the Premier League Asia Trophy in China.

The No16 has played in Claret and Blue all over the world – including the 2009 Asia Trophy in China – and always relishes the opportunity to spread the West Ham way.

With the Premier League hugely popular in the People’s Republic, Noble says this week’s tournament, in which the Irons will face Manchester City and either Newcastle United or Wolverhampton Wanderers, will be another chance to promote the Club he loves.

“We know how big the Premier League in China and it has wonderful support, so to come and see it first-hand is pretty special. We had only been here ten minutes and we’d met loads of fans, so I hope we get a good turnout on Wednesday and for our other game in Shanghai and we can put on a show for those fans.”

We know how big the Premier League in China and it has wonderful support, so to come and see it first-hand is pretty special

The skipper was part of the Hammers squad which took part in the same tournament a decade ago in Beijing – the last time the competition was held in mainland China – and says he cannot wait to step back on the pitch in the world’s largest country again this week.

“Was it ten years ago?!” he smiled. “I just remember how hot and humid it was, but it was a fantastic occasion for us, especially for me as a young boy of 22 back then.

“Seeing different parts of world, as we did in Beijing back then and Nanjing and Shanghai this time around, is special.

“We know the Premier League goes around the whole world and is such a global brand now, which is why we get the opportunity to come to places like this and play. This year, we’ve already been to Switzerland and Austria and now we’ve come to China and we’re really looking forward to training, playing, seeing some sights and having an enjoyable week.”

While there will be some downtime for the players to immerse themselves in the local culture, Noble said the main focus of the trip is to win some silverware. To do so, the Hammers will first have to beat treble winners Manchester City.

Pep Guardiola’s squad have reportedly twice been delayed in their efforts to fly to China and may not arrive in the Far East until Tuesday, but the captain knows City present the toughest of tests, no matter the circumstances.

“It’s only our second game in preseason so we’re still not fit and we need to get some minutes under our belts, so playing against the champions will help because they are really good – they always are!” he observed. “We also play them in our first game of the Premier League season, so it gives us a little glimpse of Man City early on.

“What a fantastic team they are. They’ve had a lot of players away on international duty, so I don’t know what sort of squad they’ll bring, but they’ve got a fantastic squad. You want to test yourself against the best and they are the best.”

Wednesday's Premier League Asia Trophy semi-final will be broadcast live in the UK by Sky Sports, with kick-off at 1.30pm BST.