Declan Rice has hailed the quality of Marko Arnautovic, describing the No7 as like an 'older brother' after his two goals to secure a draw against Brighton & Hove Albion.

The Austrian found the net twice in two minutes in Wednesday's Premier League clash, helping the Irons recover from going two goals down to earn a point in the first match of 2019.

The two finishes takes Arnautovic up to seven goals for the season so far, and Rice has praised the 29-year-old not only for his strikes, but his quality and attitude on the pitch.

Arnie is like an older brother and he's always trying to give me advice. He's like another captain really; he's always egging on the team to do better and to do well.

"Arnie is massive for West Ham," Rice told West Ham TV. "He gives us a boost on the pitch, to know we've got someone of his stature and his quality, and he can get us a goal at any time. Fair play to him because he held the defenders off well and got two good finishes.

"He's top. I get on so well with him. He's like an older brother and he's always trying to give me advice. He's like another captain really; he's always egging on the team to do better and to do well."

Arnautovic wasn't the only Hammer that Rice took time to praise, with the 19-year-old also hailing fellow midfielder and club captain Mark Noble for changing the game after coming on in the second half.

The 31-year-old started Wednesday's fixture on the bench but played a crucial role in both of Arnautovic's goals, and Rice says the impact of having the skipper on the field was felt when he came on. 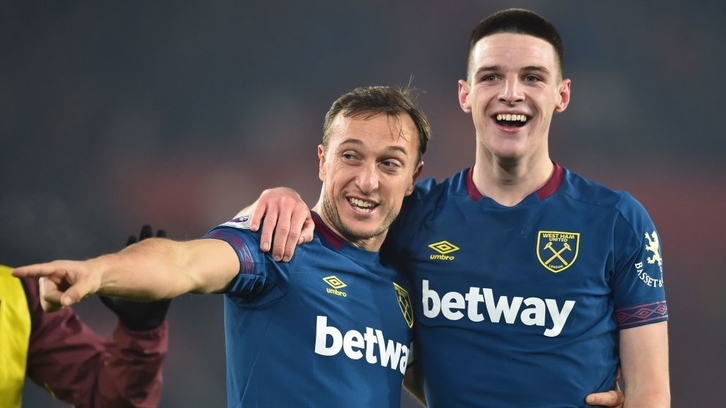 "Noble changed the game really," he continued. "He wouldn't have been too happy to not start the game, but you could feel the energy when he came on.

Rice believes the Hammers can take positives from the showing against Brighton, but knows a point at home isn't enough if the side is to continue climbing up the Premier League table.

He added: "To be fair to Brighton, they are very well prepared defensively and we struggled to break them down. We came out fighting in the second half. We went close twice and our confidence was growing, and you could see that in the team. Then we conceded one, and then two minutes later we conceded another.

"Luckily enough Arnie managed to get two for us. The spirit is massive and we've got top quality players starting and coming off the bench. We've just got to keep going and we need to start a bit quicker in games. We need three points at the end of the day. A point is good but it's not enough."