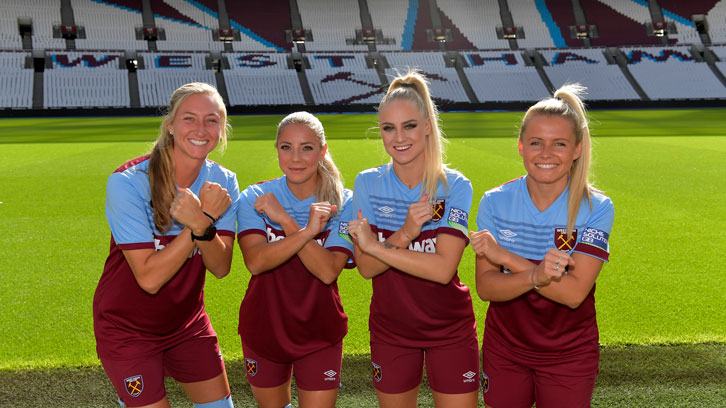 The Hammers will take on their local rivals on Sunday 29 September at 2.30pm, with a bumper WSL crowd expected for an unforgettable occasion.

Tickets for what promises to be a record-breaking afternoon are priced from just £1 for Adults, while all U16s will be admitted completely free of charge!

Women’s managing director Jack Sullivan said: “This is another historic day in the recent journey for West Ham United women’s team. After the success of last season and walking out at Wembley, it will be great opportunity to play on an iconic stage – our own home ground – for the first time ever, engaging with the West ham fans who we urge to come and get behind the team.

“Our fanbase has grown considerably since our inception, with Season Ticket sales trebling this season on the back of an excellent first campaign and following the huge growth in interest around the women’s game that followed the incredible Women’s World Cup this summer.

“This is the perfect opportunity to invite the local community and offer everyone in the surrounding area affordable family football in line with the Club's ethos. It promises to be a magnificent showcase for West Ham United and women’s football as a whole.”

Women’s Season Ticket Holders can select their seat online, free of charge, on a first come, first served basis during a priority window which closes at 5pm on Tuesday 27 August.

Alternatively, Women’s Season Ticket Holders can select their seat and purchase up to four additional Adult tickets for just £1 each and up to six U16 tickets free of charge by calling the Ticket Office by phone on 0333 030 1966.

Phone lines will be open over the Bank Holiday weekend from 8am-6pm on Saturday and Sunday, 10am-4pm on Monday and 9am-5pm on Tuesday.

From 9am on Wednesday 28 August, the sale will be opened up to Adult Men’s Season Ticket Holders and Claret Members, who can secure seats for just £1.

Continuing the Board’s commitment to affordable football for all, Adult non-Season Ticket Holders and non-Members can secure seats for just £2 each. These will go on General Sale from 9am on Friday 30 August.

All Kids go free but must be accompanied by an Adult. Each Adult can to bring up to four children, with a maximum of ten tickets per booking.

In playing our historic first match at London Stadium, West Ham United women's team will be looking to add to the memories that have already been made since 2016

Head coach Matt Beard said: “We are immensely proud to be preparing to play Tottenham Hotspur in the first Barclays Women's Super League match to be played at London Stadium.

“The growth of the women's game has been staggering in the last 12 months – from the introduction of a fully professional league in England to record attendances at this past summer's World Cup – and it has been an honour to be part of that journey with this West Ham United team.

“In playing our historic first match at London Stadium, West Ham United women's team will be looking to add to the memories that have already been made since 2016.

“Everyone involved in the Women's team – the players, the backroom team, and myself – is excited to begin making our own memories at the Stadium, starting with this game versus Spurs."

The Hammers kick-off the 2019/20 campaign with a trip to WSL champions Arsenal on Sunday 8 September, before hosting Birmingham City at Rush Green Stadium on Sunday 15 September at 2.30pm.

Previously, the Irons hosted Tottenham, who were promoted as FA Women’s Championship runners-up last season, at the Boleyn Ground in March 2016, with the Hammers running out 1-0 winners in the FA Women’s Premier League Southern Division.

Parker: We held our own for long periods