Chicharito strikes as the points are shared at Brighton 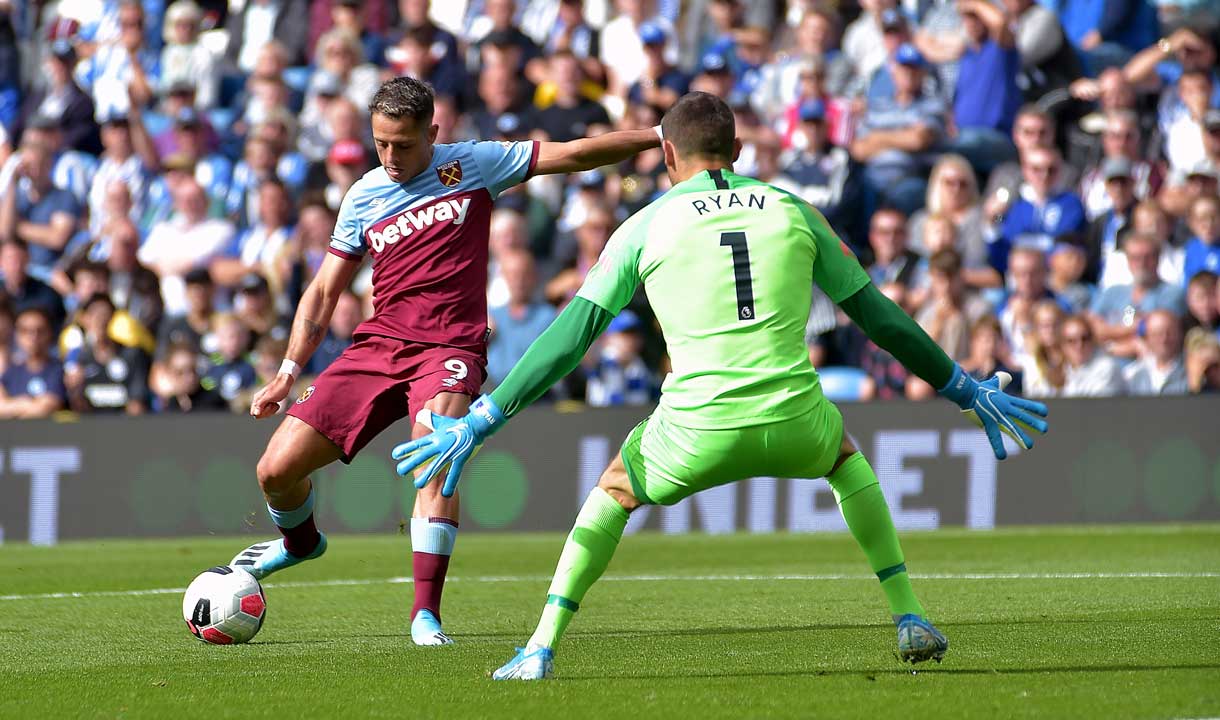 West Ham United picked up their first point of the 2019/20 Premier League season in a hard-fought 1-1 draw at Brighton & Hove Albion on Saturday.

The Hammers briefly led in the second period through Chicharito, only for Leandro Trossard to level things up within four minutes of the Mexican’s goal.

West Ham had to stand up to a vibrant Brighton side, who look to be showing more ambition as an attacking force under new boss Graham Potter, and Lukasz Fabianski was tested by strikes from Dale Stephens, Solly March and Davy Propper.

Brighton were unable to find another goal, though, so the points were shared on the South Coast as the Hammers got up and running.

Sebastien Haller and Felipe Anderson were ruled out of the Amex Stadium clash after picking up knocks in last weekend’s loss to Manchester City, and the pair were among five Hammers to make way from Manuel Pellegrini’s starting XI.

Chicharito, Pablo Fornals and Robert Snodgrass came into the midfield, while Angelo Ogbonna and Arthur Masuaku were called into the defence.

The hosts had a golden opportunity to strike inside the first minute though, when Dan Burn was left all alone to meet a free-kick from deep close to goal. Thankfully for the Hammers, his header was directed over the top.

West Ham went on to enjoy good spells of possession in the opening 20 minutes, but struggled to make headway against a stubborn Albion defence.

Then, Brighton began to come into it at the other end and Lukasz Fabianski had to make diving stops to deny Stephens and March with strikes from the edge of the area.

With 27 minutes on the clock, Brighton thought they had taken the lead when the Hammers failed to deal with another set play. Burn hooked the ball back into the middle and Tossard slammed a volley home.

However, the VAR ruled that Burn was offside as the free-kick was played into the box, so the Hammers were handed a major let-off.

It couldn’t hide that they were second best for the last 25 minutes of the opening period though and they headed back to the dressing room knowing they needed to step it up after the break.

They got just the boost they wanted 16 minutes after the restart when Chicharito did what he does best, running off the shoulder of the last man to race onto Manuel Lanzini’s through ball and slot under Mat Ryan.

The lead was to only last four short minutes, however. Trossard, whose celebrations were cut short by that VAR call in the opening period, would not be denied this time, drilling into the bottom left corner after Glenn Murray held off Issa Diop’s challenge as he approached the area.

Brighton were back on the front foot, and sub Neal Maupay wasted a good opportunity to complete the turnaround on 74 minutes, but blazed over after Murray hunted down a ball in the right channel and cut back into the centre.

At the other end, Lanzini led a lightning-fast counter attack and prodded through to Robert Snodgrass four minutes from time, but Ryan got down well to his right to repel the Scotsman’s effort.

In the end, neither team could land the telling blow as Taylor called time with the scores locked at 1-1.