Noble: Everyone played well at Everton and you need that 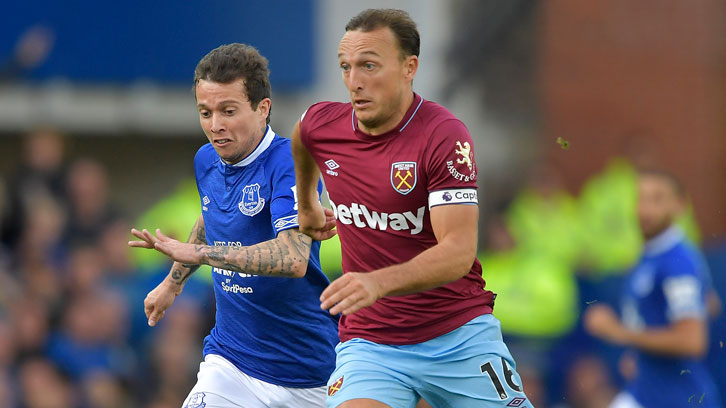 Mark Noble said Sunday's victory at Everton was the result of every single player in Claret and Blue giving their all for the whole 90 minutes.

The skipper, who scored just the second win of his career at Goodison Park, issued a rallying call for commitment following West Ham United's 1-0 home defeat by Wolverhampton Wanderers a fortnight previously.

And the whole team responded with their most complete performance of the season to collect their first Premier League points of the campaign.

We haven't played that badly in our other games, but it's all about results and to get those three points on Sunday was fantastic for everyone

"To be honest, Sunday was all about the result and not about the performance, but when you get both, it's really helpful," he told whufc.com. "It's always a cliche in football but ,if you work hard in football, you get the results, and we worked hard and took our chances and got the three points.

"Everyone played well and you need that. We haven't played that badly in our other games, but it's all about results and to get those three points on Sunday was fantastic for everyone."

Noble was not only delighted by the final result, but also the goals that secured it.

Andriy Yarmolenko belted in the first two, with Noble intercepting Jordan Pickford's clearance to set up the Ukraine star's second, before starting the move which climaxed in Marko Arnautovic's clincher.

"They started really well, then we got the goal, then got the second goal," the No16 observed. "They scored ten seconds before the break and you start to think 'Here we go...' but we came out and played really well in the second half.

"We scored three really good goals, particularly the third one. It started out wide with me and Yarmo, then went inside to Pedro and he played a one-two and then back into Marko, so it was a fantastic goal.

"The second one I got an assist, but it was more of a case of me taking a tackle and their left-back wiped me out! The ball broke to Yarmo and he cut inside and scored, so it was all good."

Next on the fixture list are home fixtures with Chelsea and Manchester United, starting with the visit of the Blues to London Stadium on Sunday.

West Ham beat Chelsea on home turf last season and, having got off the mark this, the captain is targeting another famous victory over their west London rivals.

"Last week's win gives everyone something to get excited about," the skipper concluded. "We're at home now and I'm hoping the crowd are going to be massively behind us on Sunday and we can get another result for them."