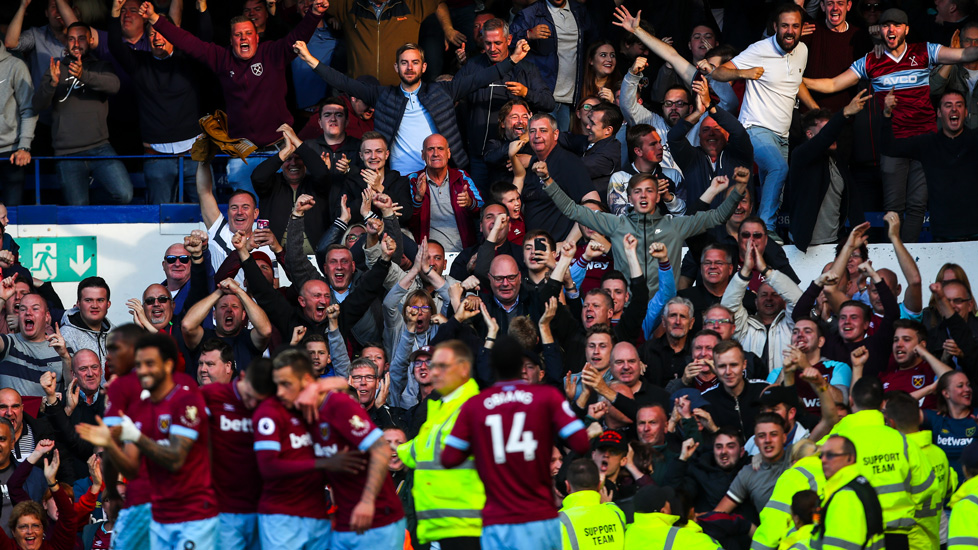 Andriy Yarmolenko’s double helped fire West Ham United to their first three points of the season at Everton on Sunday.

Yarmolenko struck twice before the break to put the Hammers in command at Goodison Park, and although Gylfi Sigurdsson pulled one back before the break, Manuel Pellegrini’s side held their nerve.

Marko Arnautovic scored his third goal of the season just past the hour to restore the visitors’ two-goal advantage and seal a happy awayday for the 3,000 travelling Hammers.

Pellegrini made six changes to his Hammers side as they returned to action from the international break, handing a first Premier League start to Yarmolenko.

The Ukraine forward made an instant impact, putting the Hammers in front with just eleven minutes played.

Another of the returnees, Pedro Obiang, was involved, hooking a pass to Arnautovic which sent the Austrian in the clear. Arnautovic had Yarmolenko on his right shoulder, and he intelligently squared the ball to his teammate for a simple finish.

The goal was a welcome fillip for the visitors, and they weren’t far away from a second five minutes later when Issa Diop directed Felipe Anderson’s wide free-kick at Jordan Pickford in the Everton goal.

Everton’s first big chance arrived with 25 minutes on the clock, but Cenk Tosun couldn’t direct his header away from Lukasz Fabianski after rising highest to meet Lucas Digne’s left-wing cross.

Yarmolenko punished him with an outstanding finish six minutes later to put the Hammers 2-0 up.

Mark Noble fed the ball to the No20 in the right channel, and he dropped his shoulder inside Kurt Zouma to buy space for a shot which he dispatched past Pickford’s dive and into the top left-hand corner from 18 yards.

Tosun stung Fabianski’s fingertips with a strike from the edge of the box on 37 minutes as Everton looked for a route back into the contest, and it came in the dying embers of the opening period as Sigurdsson planted a header from Jonjoe Kenny’s cross into the net.

But West Ham restored their two-goal advantage 16 minutes into the second period, and it was another goal of high quality.

Arnautovic and Obiang were the protagonists. The former held up possession on the edge of the area and laid off for the No14, who skipped into the area and returned the compliment for Arnautovic to slide a left-footed finish past Pickford.

Oumar Niasse thundered a shot against the crossbar from close range with six minutes remaining, but Everton could not get past the Hammers for a second time as they saw out time to record a welcome first win of the season.