Diangana: The hard work in training is paying off

The hard work is clearly paying off for Grady Diangana as he seeks to establish himself in the West Ham United first team.

The young winger produced the most-effective performance of his short but successful career in Claret and Blue in Saturday’s 4-2 Premier League win over Burnley.

Diangana lit up London Stadium with his sure technique, composure in tight situations, willingness to run at his man and resilience in the face of the stern physical test posed by the combative Clarets.

The reward was a maiden Premier League assist for Felipe Anderson and, with praise ringing in his ears from his manager, teammates and supporters alike, the 20-year-old was rightly wearing a smile on his face when he spoke to whufc.com after the game.

When you can feel the energy from the crowd, it gives you that extra energy

“It was one of the best feelings I’ve felt in a long time, getting the three points and seeing how much it meant to the players and to the fans,” said the No45. “It was a good feeling.

“I was thinking ‘Why us!’ when they got it back to 2-2, but it was good to see the desire in the team to keep going and keep believing that we could get the victory.

“This team never gives up, especially with the crowd behind us throughout the whole game. When you can feel the energy from the crowd, it gives you that extra energy.”

Diangana’s signature moment came midway through the second half with the game poised at 1-1, despite the Hammers’ prior domination, when he collected a Marko Arnautovic pass and fed Felipe Anderson a split second before being wiped out by James Tarkowski’s late tackle.

“I saw Felipe and I played it through but for two seconds I didn’t realise where I was as I got clattered, but I heard the crowd scream and I realised it was a goal, so I was happy!” he laughed.

“I saw the defender so I knew to try to safely manoeuvre so I wouldn’t get too badly injured, so that was good too!” 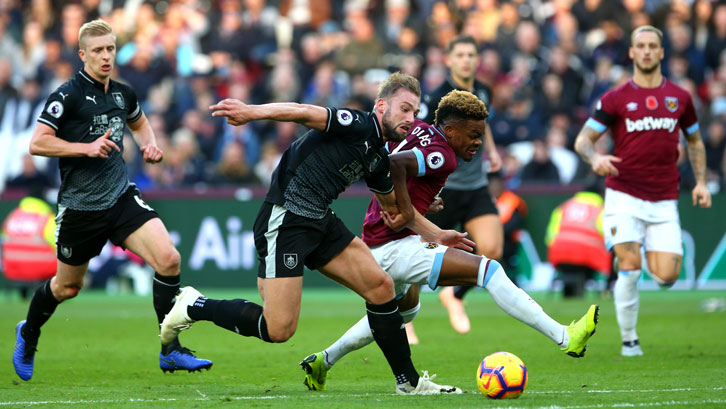 West Ham were pegged back again by Chris Wood’s header, but Diangana and his teammates were not to be denied, with the DR Congo-born youngster playing a vital role in West Ham’s match-clinching third six minutes from full-time.

He held off Robbie Brady’s challenge on the touchline before turning inside, finding Robert Snodgrass and making his way to the edge of the penalty area. There, he exchanged passes with Arnautovic, whose blocked shot fell into the path of Felipe Anderson to score via a deflection.

For Diangana, being able to influence a Premier League game so late on was the result of hard work on the training pitch and in the gym at Rush Green.

“One thing I’ve been working on is to be robust and to keep going in every training session so I would have the same energy in every game,” he explained. “It is extremely different from Under-23 football.

“The players are much quicker and stronger, so you have to be cleverer and the desire to want to win and to want to get the ball is much higher.”