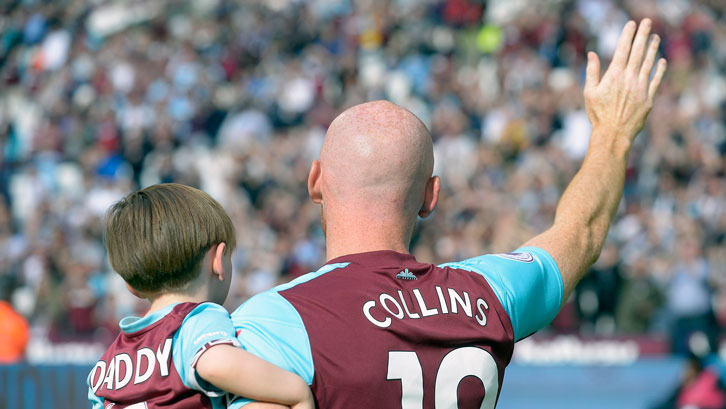 West Ham United can confirm that James Collins will leave the Club when his contract expires on 30 June.

Collins will depart having made 214 appearances across two spells spanning ten seasons in Claret and Blue.

The centre-half, who turns 35 in August, initially joined the Hammers from Cardiff City alongside close friend Danny Gabbidon in July 2005, making his debut in a League Cup second round victory at Sheffield Wednesday in September of the same year. He initially spent four years in east London before moving to Aston Villa.

The former Wales international returned to West Ham in the summer of 2012 and established himself as a regular starter under Sam Allardyce following the Club’s promotion to the Premier League.

Collins’ final appearance saw him don the captain’s armband for the last few minutes of the Hammers’ 3-1 Premier League win over Allardyce’s Everton on 13 May 2018.

Joint-Chairmen David Sullivan and David Gold said: “We would like to place on record our sincere thanks for the outstanding service James has given West Ham United down the years.

“His bravery and commitment on the pitch were never called into question and he has played his part in establishing the Club in the Premier League since his return in 2012.

“We appreciate just how popular James is among our fellow supporters but, with the appointment of a new manager, we felt together that the time was right to go our separate ways.

“It goes without saying that we wish James and his family every success in the future and they will always be welcome at London Stadium.”

Former France defender Patrice Evra will also depart when his contract expires on 30 June. The 37-year-old arrived on a short-term contract in February 2018 and made five appearances in Claret and Blue.

West Ham United would like to thank all five players, and Collins in particular, for their hard work and commitment and wish them all the best with their future careers.