Carroll aiming to end season on a scoring note 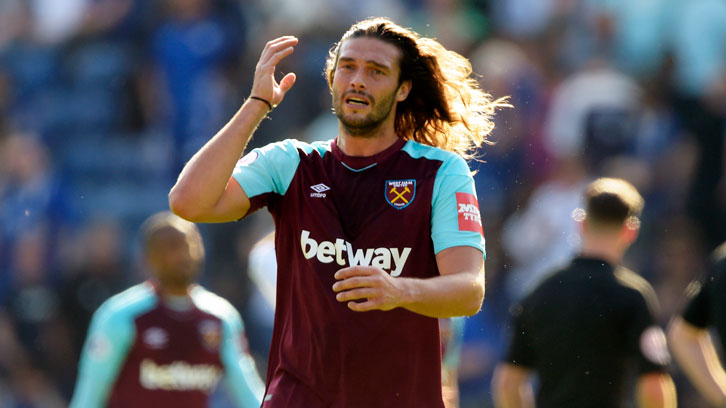 Andy Carroll is hoping to repay the support of the Claret and Blue Army by signing off the season with a couple of goals in West Ham United’s final two Premier League matches.

The centre forward has hit the net just three times in 17 appearances during a stop-start campaign interrupted by groin and ankle injuries, but each of those three goals was vital to the Hammers’ successful bid to beat the drop.

And having scored twice in the home win over West Bromwich Albion and a last-gasp equaliser in the 1-1 draw with Stoke City, the No9 wants to hit the net again when West Ham host Manchester United and Everton – rewarding the supporters who sang his name throughout Saturday’s vital 2-0 victory at Leicester City.

“Saturday was brilliant,” he confirmed. “For me personally, coming on after they were singing my name while I was warming up on the touchline was really good. I didn’t really expect it, to be honest, but our fans chose to get behind me and it was nice to hear.

“It was a good game for us. The lads stuck together and we deserved it, really. I thought we played well and it was a good day all round. The fans were brilliant, we were brilliant and the other results went our way, too.”

Carroll could have netted his fourth of the season at the King Power Stadium, only for his touch to let him down at the vital moment inside the Foxes penalty area.

“I could have had a goal, but I decided I’d take it out wide instead and hold a couple of their players off by the corner flag in front of our fans, just to show off my strength! Being serious, I should have probably taken a better touch and scored.

“After that, I’ll take Billi and the kids away for a nice chilled holiday and keep myself ticking over before coming back in for pre-season training.”

While Carroll was unable to find the net, his captain and friend Mark Noble was, with arguably the best goal of his long and illustrious Claret and Blue career – an unstoppable 25-yard volley that flew into the bottom corner of the Leicester net to put West Ham 2-0 up midway through the second half.

“We laughed after the game as we reckon it was probably his first goal from outside the box, but he told us it wasn’t and that he used to do it all the time!” Carroll smiled.

“He never normally shoots from there as he usually controls it and lobs it back into the box, so he must have had a rush of blood.

“To be fair to him, it was a hell of a strike, the best goal of his career and it was his birthday on Monday, so he’s had a good week so far. He’s 31 now, so he’s getting on a bit!”