Felipe Anderson: I want to show my value in the Premier League 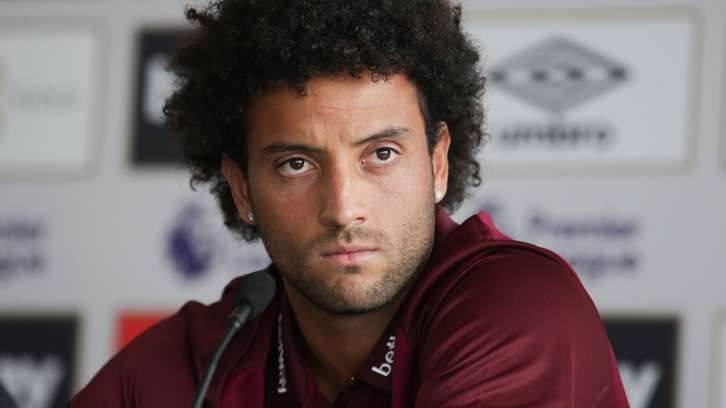 Felipe Anderson says the challenge of testing himself against the very best the Premier League has to offer was one reason behind his decision to join West Ham United.

The Hammers’ club-record signing has spent the last five seasons in another of Europe’s top leagues, Italy’s Serie A, with Lazio, earning rave reviews for his ability to create and convert chances against even the stingiest of defences.

With 34 goals and 42 assists in 177 appearances for the Roman club, the Brazilian established himself as one of Italian football’s most dangerous wingers – and now he wants to do likewise in England’s top flight.

“It’s always been a dream to play in one of the biggest and most competitive leagues in the world,” said Felipe Anderson, speaking to the media at his official unveiling at London Stadium. “I just want to show my value here.”

That the 2016 Olympic Gold medallist will seek to show that value in the Claret and Blue of West Ham United is testament to manager Manuel Pellegrini, director of football Mario Husillos and the Board’s desire to bring him to London Stadium.

As one of Serie A’s most threatening wide players, Felipe Anderson embarked on more dribbles per 90 minutes than any other player in the division, adding four goals and seven assists in just 21 appearances to prove he is not just style, but substance too.

Repeating that performance in the Premier League will not be easy, but the 25-year-old is eager to emulate another South American who became a hero in a Hammers shirt, Carlos Tevez, and leave his own memorable mark on east London.

“What attracted me was the traditions of the club and the value that they put in me, and that they believed in me,” he confirmed. “That was why I didn’t hesitate in the decision. I just made the decision based on that. It was easy.

“Personally, I’ve always watched the Premier League and I’ve been following the great players of West Ham like Carlos Tevez and Javier Mascherano.

“West Ham is a historical club in itself and when the offer came I was just happy a club like this had interest in me. Also, to have a manager such as Manuel is an added bonus.”