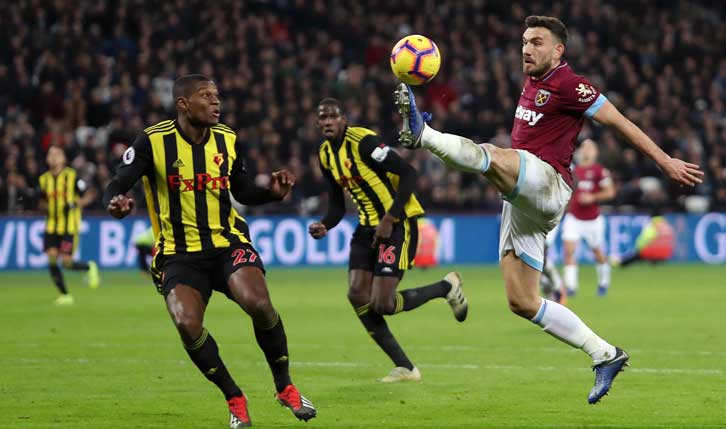 West Ham United’s recent winning run was brought to an end by Watford at London Stadiumm, with Troy Deeney and Gerard Deulofeu getting the away side a 2-0 result.

Deeney’s penalty in the first half put the Hornets in front, although the Irons had the chances to level the game prior to the interval.

And, as West Ham pressed to earn a share of the points, Deulofeu combined with Roberto Pereyra to hand the Irons defeat.

The Hammers flew into action in the first half and, after just three minutes, came close to opening the scoring. Michail Antonio found space on the right flank and almost played an excellent cross to Chicharito, only for Christian Kabasele to intercept.

Robert Snodgrass’ shot from the edge of the box was deflected wide, before Declan Rice saw a header saved.

Antonio himself had a go at goal next, driving a powerful strike which Ben Foster could only tip away.

On 28 minutes the away side were awarded a spot-kick, after Balbuena was ruled to have brought down Pereyra in the penalty area. Up stepped Deeney, who put the ball into the top right corner to give the Hornets the advantage.

West Ham pressed for the leveller, although lost Balbuena due to a knock, with Angelo Ogbonna entering the fray.

As the first half drew to a close, Chicharito went closest for the Irons. Felipe Anderson’s deep cross was headed back across goal by Antonio, and the Mexican turned a volley on target. Foster’s outstretched hand just stopped the ball from sneaking in at the far post.

Like the first period, it was the Hammers who started brightly, and five minutes after the restart the home side hit the woodwork as Antonio’s header bounced back off the post.

Arthur Masuaku opted to test Foster with a dipping effort, which the Watford goalkeeper saved well, before Pereyra had a huge chance to double the Hornets’ advantage, only for Fabianski to deny the midfielder.

With West Ham pressing so hard, Watford had opportunities to exploit gaps in the home side’s defence, and Fabianski was forced into two fantastic saves, first from Abdoulaye Doucoure and then Deeney.

Antonio hit the crossbar again, after some pressure from Grady Diangana led to a cross, after Snodgrass saw his effort tipped away.

But, with West Ham unable to make their chances count, Watford secured the three points as Pereyra combined with Deulofeu, allowing the latter to curl home.