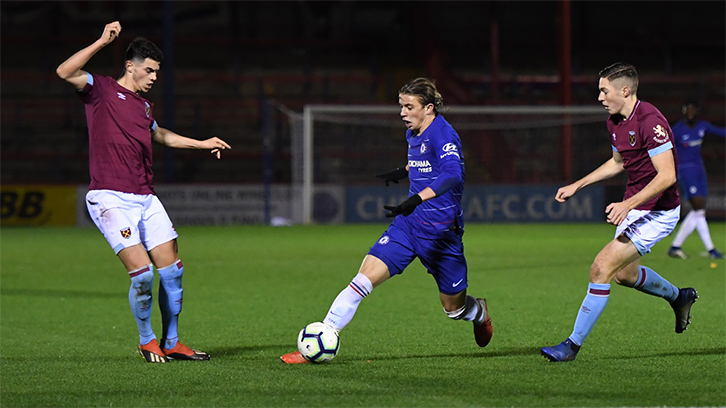 West Ham United’s U23s scuppered a 2-0 80th minute lead at Chelsea on Friday night as the hosts scored three times late on to secure their second victory over the Hammers in Premier League 2 this season.

Goals from Reece Oxford and Joe Powell – from the penalty spot – had the Hammers sailing until a frantic final ten minutes left the visitors crestfallen at Aldershot Town FC.

Liam Manning and Steve Potts side looked the better side for well over an hour and could have taken the lead twice through Powell in the first half, the midfielder going close on both occasions, the second time choosing to take the shot on his preferred left rather than curl it with his right after Jahmal Hector-Ingram’s clever pass.

But just before the break, West Ham got the advantage they deserved and again Powell was at the heart of it. Swinging in a dangerous set-piece, defender Reece Oxford met the free-kick at the back stick and headed into the ground before finding the roof of the net.

And eleven minutes after the restart, things got even better for the Claret and Blues when Hector-Ingram was upended inside the penalty area and Powell stepped up to fire in his second penalty against the Blues this season, placing confidently into the bottom corner.

But as Chelsea made some changes, the Hammers tired and soon the contest had just a goal separating the two sides as sub Luke McCormick drove into the bottom corner from ten yards.

And within two minutes, the derby was poised level at 2-2. McCormick this time turned provider, floating a perfect cross into the box for fellow change Daishawn Redan to head in.

And disaster turned to despair for the Hammers a minute into injury time, just after visiting stopper Joseph Anang thought he’d earned his side a point, saving expertly from Conor Gallagher’s strike.

One final attack in stoppage time saw McCormick cushion a header into the far corner to make it Chelsea 3-2 West Ham United.