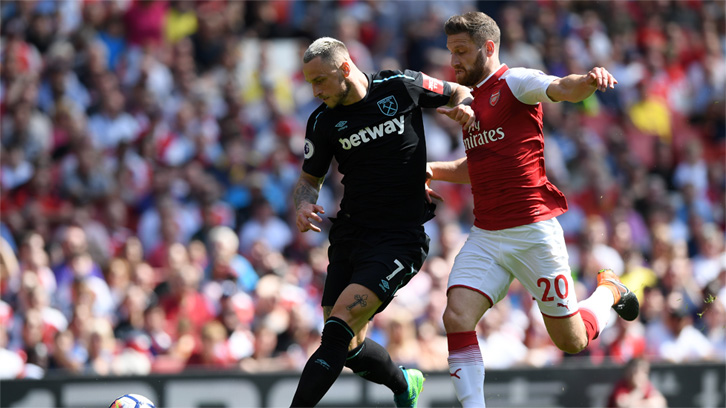 An Aaron Ramsey strike was followed by two Alexandre Lacazette goals in the final ten minutes to seal all three points for the hosts, who had been pegged back by Marko Arnautovic’s equaliser with 26 minutes remaining.

Previously, Nacho Monreal had given the Gunners an early second half lead but David Moyes’ men had fought back to get on level terms.

Early on in the London derby, it was the Hammers who looked the more dangerous and likely to take the lead.

Just after the ten minute mark, Edimilson Fernandes was an inch or two from latching onto Joao Mario’s clever pass, but it just evaded him. That was a sign of things to come for the next ten minutes as the visitors piled on the pressure.

Next, Arnautovic out-muscled Shkodran Mustafi and broke free down the left, but the Austrian’s effort was pushed clear by goalkeeper David Ospina.

Moments later, Cheikhou Kouyate rose highest in the penalty area from a Joao Mario corner, but could not get a clean connection on his head, which dropped onto the top of the crossbar and out of harm’s way.

But, riding the spell of pressure, Arsene Wenger’s men began to assert their authority and went close when Danny Welbeck curled wide from 20 yards.

The forward had a second opportunity ten minutes later, nodding a Hector Bellerin centre over the top before Aaron Ramsey smashed wide on the stroke of half time. 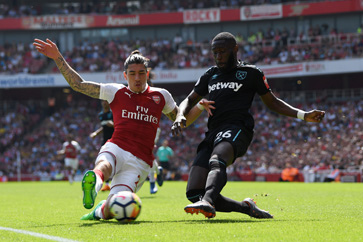 The Gunners’ spell of dominance continued after the break and they soon made it count. Granit Xhaka, who had already caused David Moyes’ men problems with his set-pieces, swung in a corner from the left, and it was met by Monreal who coolly volleyed into the bottom corner.

But the lead lasted just 13 minutes. After a Hammers set-piece, substitute Chicharito kept the ball alive inside the penalty area, heading back into the danger area as it was cleared.

Eventually, the ball fell for Manuel Lanzini – also brought on as a sub – who beautifully picked out Arnautovic at the back stick, and the No7 – putting his goal tally for the season into double figures – did the rest, smashing low and hard beyond Ospina, who stood no chance from the left-footed strike. Game on.

With 18 minutes remaining, the hosts thought they had regained the lead, but goalkeeper Joe Hart was there to deny Xhaka, whose 25-yard strike was heading for the bottom corner.

But with eight minutes remaining, the Gunners’ second did come, after a mix-up between Hart and centre-back Declan Rice. A Ramsey cross, intended for the head of Lacazette, was left alone by Rice who ducked under the ball, which tucked into the corner of the net. 2-1.

And as the Hammers went in search of a second equaliser, Arsenal proved too strong on the break and scored twice more.

First, Lacazette fired in at the near post via a deflection off Aaron Cresswell, before Ramsey laid-off for the Frenchman to smash in his second in the centre of the box. Game over, and a frustrating finale for Moyes’ men who were ten minutes away from an important Premier League point.