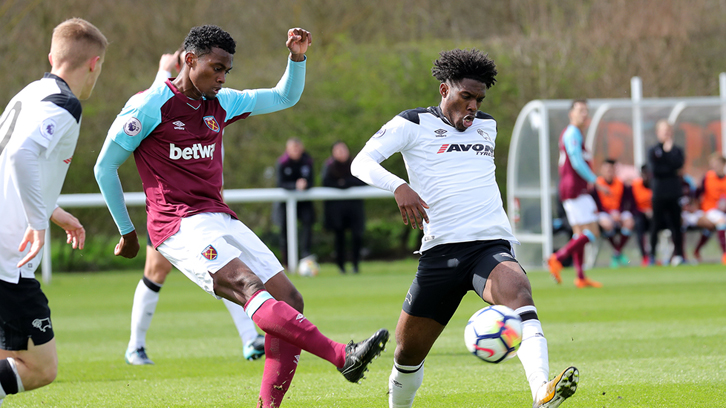 West Ham United’s U23s could not continue their good end-of-season form as they went down 1-0 at an experienced Derby County side on Monday afternoon in Premier League 2.

Jayden Bogle’s early second half strike was enough to separate the two sides at the hosts’ Training Centre and condemn Terry Westley’s Hammers to a first defeat in over a month.

Following wins on the road at Manchester City and Everton coming into the clash, the Hammers were in a confident mood however they started slowly against Darren Wassall’s team, which contained the likes of George Thorne, Richard Keogh and Jamie Hanson.

Derby were first to put the pressure on and tested Nathan Trott ten minutes in when experienced defender Keogh volleyed straight at the stopper from a corner.

Nine minutes later, the visitors had their first attempt on goal, and it was a good one. Marcus Browne, fresh off the back of his four goal haul at Everton last week, cut in from the right-hand-side but was denied by Rams stopper Jonathan Mitchell.

Keogh - playing as a defensive midfielder - was soon at it again, with Trott in hand to save a second time from a low 20-yard drive. 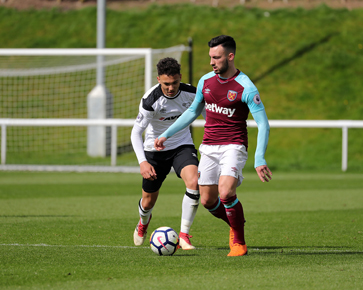 On 26 minutes, the referee on another day may have pointed to the penalty spot when Vashon Neufville received a clever Nathan Holland backheel pass and went down in the box, but the Hammers’ appeals were waved away.

Before the break, the hosts had their chances to go in in front, but both Jamie Hanson and Ethan Wassall spurned opportunities to score.

But after the restart, there was the goal that Derby looked close to scoring as Bogle made it 1-0. A long ball over the top was misjudged by substitute Ajibola Alese and County’s Alex Babos was able to turn and lay-off for the full-back who charged into the box before finishing easily past Trott.

West Ham sprung into life having gone behind, and with just over 20 minutes remaining went close to equalising. Holland, drifting in off the left-hand-side as he does so well, crossed to the back post but the rising Browne could only glance wide.

Moments later, the skipper had an even more promising opening, but slashed wide a low drive from inside the box after he was released by Conor Coventry.

Despite the visitors’ late pressure, it was Derby who nearly added the next goal in injury time when Luke Thomas shifted the ball onto his left before curling towards the top corner, only for Trott to pluck out a tremendous save in the dying moments.

It was, though, the hosts who were left celebrating three points at the full-time whistle, as West Ham contemplate Friday’s London Stadium fixture against title-chasing Arsenal.