Rice: Arnautovic is the ‘best player I’ve played with’

Declan Rice has praised Marko Arnautovic as the best player he’s shared a pitch with after the Austrian netted twice in the 3-0 win over Southampton.

Arnautovic scored his eighth and ninth Premier League goals of the campaign with a close-ranged effort and an excellent volley to guide the Irons to a victory over the Saints on Saturday.

The 28-year-old has been in tremendous goalscoring form in recent months for West Ham and Rice, who helped the Hammers to a clean-sheet, has named Arnautovic as the standout player that he’s played alongside.

“He’s an unbelievable player,” Rice told West Ham TV on Arnautovic: “He’s probably the best player I’ve played with, and he’s such a nice guy as well. He’s done it with Austria during the international break, and he’s done it for us today. He’s a crucial part of our side.”

Arnautovic is probably the best player I've played with, and he's such a nice guy as well.

It was Joao Mario who opened the scoring on an excellent day at London Stadium, blasting home his first goal for the Club on the edge of the area on 13 minutes.

Arnautovic added his first four minutes later after seeing an initial header saved, before capping a sensational first half for David Moyes’s team with a brilliant volleyed strike after Arthur Masuaku’s swerving cross.

With no goals conceded as well, Rice was delighted with a near perfect day on the pitch for the Hammers.

The 19-year-old continued: “As you can see on my face, I’m over the moon. Today was special and we needed those three points. That puts us five points ahead of Southampton and we need to build on that now. We get back to training this week and look forward to Chelsea. 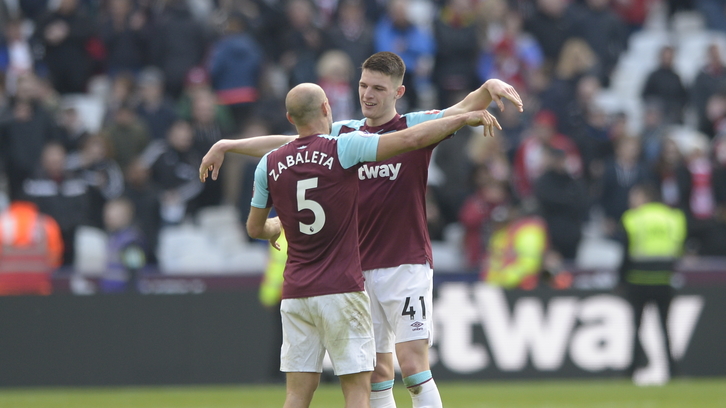 “I think today we’ve made them [the fans] happy. It’s a 3-0 victory, a clean-sheet, and today me, the lads and manager couldn’t be happier.”

The performance against Mark Hughes’ Southampton caps an incredible few weeks for Rice, who was named Man of the Match on his senior debut for the Republic of Ireland last week.

“I don’t think I can quite sum it up,” he admitted. “It’s been crazy to be honest. A crazy three weeks. I won international player of the year for the U19s, I won Man of the Match on my Ireland debut, and today topped it off with 3-0 and a clean-sheet.

“It was the first clean-sheet we’ve had in a while and to win today was a massive boost.”