Sakho strikes at the death to sink Swans 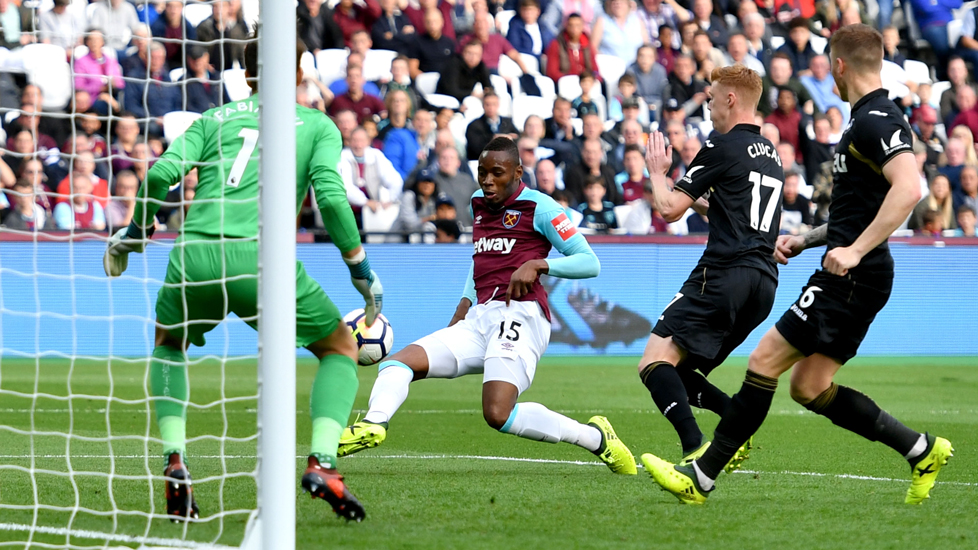 The points looked destined to be shared on an afternoon of few chances at London Stadium, but the Hammers finally found the key to unlock the Swans defence at the death with Arthur Masuaku delivering and Sakho finishing.

Victory was West Ham’s second in three home games and sees them sign-off for the international break having taken seven points from four September games.

The Hammers started with Andy Carroll and Chicharito in attack together, but it was the hosts’ two wide players who combined for the afternoon’s first opportunity.

There were four minutes on the clock when Andre Ayew sent over a deep cross from the left. Michail Antonio volleyed down into the ground and Swans keeper Lukasz Fabianski dived to his right to push the ball away.

Ten minutes later, the Chicharito-Carroll pairing posed a threat, as the former controlled in the area and laid back to Carroll, but the No9’s shot took a heavy deflection and was easily smothered by Fabianski.

Swansea countered to the other end, and Wilfried Bony let fly from range, forcing Joe Hart to dive to his left to parry.

Seven minutes later, Renato Sanches made a break into space from midfield, heading towards the edge of the area before passing left to Tom Carroll. The shot was on, but Pablo Zabaleta closed down the space quickly to block on the slide.

And that was about that for a first half in which both sides struggled to find the spark needed in the final third to make the difference.

Swansea went for a change of plan at the break, introducing Leroy Fer for Bony, but it was West Ham who were the first to go close when a deep cross from the right found Carroll in space, but the home striker couldn’t quite catch up with it and toed wide.

Still chances were at a premium though, so just past the hour Slaven Bilic turned to his bench to give Manuel Lanzini his first home run-out of the season in place of Mark Noble.

With 15 minutes to go Swansea’s Martin Olsson went close with a right-foot curler from the edge of the area which just missed the far post.

Eleven minutes later, the Hammers went yet closer as Masuaku delivered a bouncing cross from the left and Carroll guided it goalwards with his left boot, only to see the shot bounce off the crossbar and away to safety.

It looked as though the goal would not come, but a minute from time the deadlock was broken as two of Bilic’s subs combined.

Masuaku did brilliantly to head towards the by-line and fashion space for a cross, and his low, pacy delivery was left on a plate for Sakho to slide home at the far post.