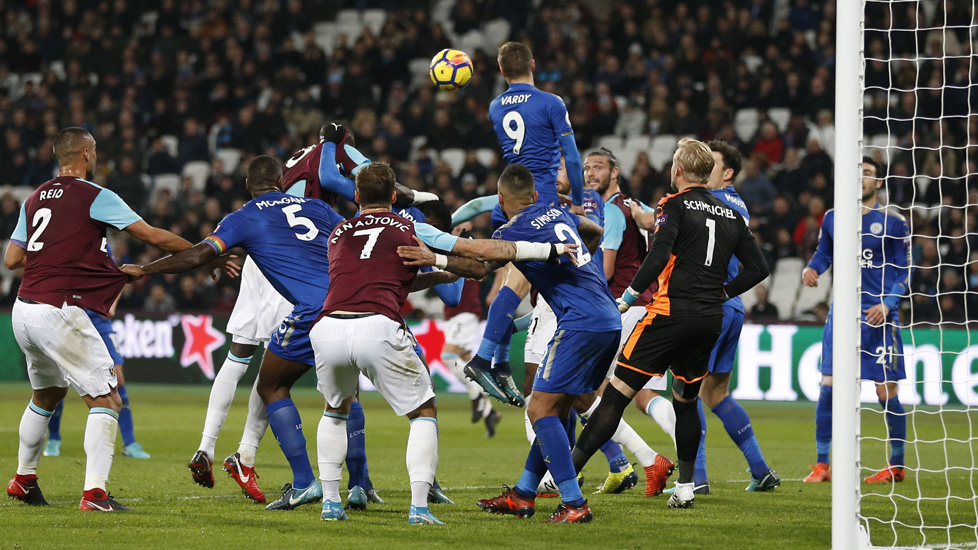 Cheikhou Kouyate’s header earned David Moyes his first point as West Ham United manager as his side fought back well to draw 1-1 with Leicester City on Friday night.

The Hammers had to recover from the early blow of falling behind to Marc Albrighton’s eighth minute opener, and they showed great spirit to do just that.

Kouyate rose highest to nod home a Manuel Lanzini corner on the stroke of half-time and it was the Hammers, backed by a tremendous atmosphere inside London Stadium, who remained on the front foot after the break.

Joe Hart was barely tested in goal in the second period as the hosts searched for a way through, but they could not break down a stubborn Foxes defence again and had to settle for a point.

Moyes made one change from the side which faced Watford in his first game as Hammers boss, with Arthur Masuaku coming in for Mark Noble, but his team made a similar start to that Vicarage Road.

There were just eight minutes on the clock when Jamie Vardy fashioned space on the left to cross. His low delivery eluded Angelo Ogbonna and Albrighton had moved in from the flank to steer home.

Vardy’s pace threatened to create another chance midway through the half when he burst into life in the left channel and nicked the ball inside Winston Reid, but Marko Arnautovic had tracked back diligently to shepherd the England striker away from danger.

It was an excellent piece of defending and the Hammers almost took full advantage on 26 minutes when Masuaku’s strong run forward was halted illegally outside the box and Lanzini’s delivery was flicked goalwards by Ogbonna, forcing a save from Kasper Schmeichel.

The Hammers were trying to get on the front foot, but had to be wary of Leicester’s pace on the counter and Riyad Mahrez made a couple of probing runs as time wore on before the break, calling Hart into action with one rising effort from 20 yards.

At the other end, the hosts’ fashioned an opportunity for Kouyate eight minutes before the interval, but he could only nod wide after Cresswell crossed wickedly from the left.

Right on the stroke of half-time the Senegal midfielder more than made up for it, rising in the centre to head Lanzini’s corner goalwards with enough force that Danny Simpson’s shoulder couldn’t keep it out on the line.

It was an impressive response to the early blow of falling behind and Masuaku tried to drive the Hammers yet further forward early after the restart, making Schmeichel hold his testing cross-shot as he drove on down the left.

Arnautovic was continuing to put a real shift in and he got across his man to meet a Lanzini cross on 63 minutes, but from his position in front of the near post he couldn’t force the ball on target.

Although West Ham were having the better of the game, clear chances were difficult to come by as the game looked to be heading for a draw.

There was time for one more opportunity when sub Andre Ayew acrobatically attempted to score in the aftermath of a late corner, but the ball flew over the bar and the Hammers had to settle for a well-earned point.