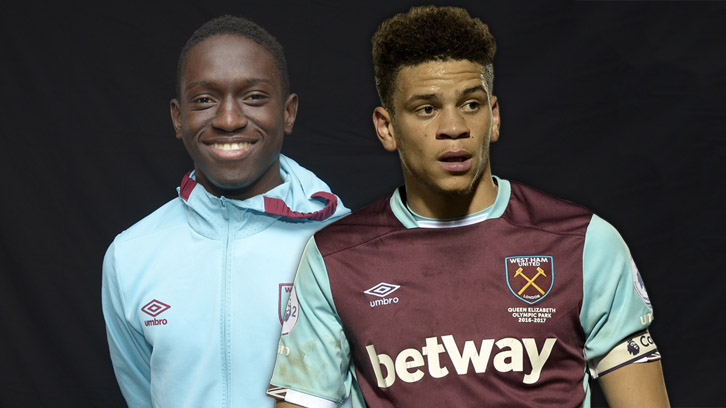 Outstanding West Ham United U23 pair Domingos Quina and Marcus Browne have been nominated for the Premier League 2 Player of the Season award.

The duo have been in fine form for Terry Westley’s team – who clinched promotion to Premier League 2 Division 1 earlier this week – over the course of this season, racking up 42 appearances between them in all competitions.

Both talents have also turned out for Slaven Bilic’s first team this season, Browne having played 15 minutes for the Hammers in the UEFA Europa League away at Astra Giurgiu, while Quina was introduced as a sub in both ties against NK Domzale in the same competition.

The competitive debut came shortly after the Portuguese signed for the Club, just weeks after UEFA European Championship glory with his country’s U17s during the summer.

Quina also enjoyed a London Stadium bow in West Ham’s opening ceremony of their new home, as Serie A winners Juventus travelled to east London for the famous afternoon.

But it was in the PL2 team Quina flourished, becoming a key player in the heart of the side’s midfield and he was subsequently nominated for the October Player of the Month award.

A month later, the midfielder signed his first professional contract, putting pen to paper on a deal to keep at the Club until at least 2019.

Quina scored his first goal in Claret and Blue against Wolves in October, before bagging one of the Club’s best goals of 2016/17, lobbing Leicester City’s goalkeeper away from home in the Premier League Cup from just inside the hosts’ half. 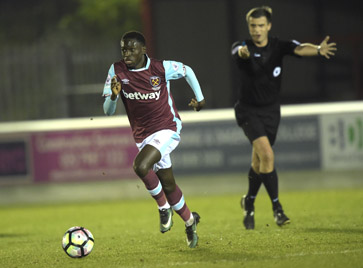 Recognised for his superb displays, the 17-year-old was named on the first team bench eleven times in the Premier League, and will be hoping for another opportunity against Burnley at Turf Moor on Sunday.

After a highly-impressive first half of the campaign for the U23s, Browne – who scored three goals and made three others for the youngsters – was the subject of much interest from clubs in the Football League and moved on loan to Championship side Wigan Athletic in January.

The attacker only made one appearance for the Latics, coming on as a substitute against Manchester United in the FA Cup at Old Trafford in late January, though 19-year-old was on the bench on a further three occasions for the side.

His three goals – against Newcastle and two against Norwich – were of huge importance to the Hammers this season and Browne’s terrific form was capped with a December Premier League 2 Player of the Month nomination.

The forward’s excellent 2016 was also rewarded earlier this year as he put pen to paper on a new three-and-a-half-year-deal.

The Premier League 2 Player of the Season nominations were voted for by managers of opposing clubs, and the two Hammers have joined nine others on the shortlist.