Westley – We gave so much 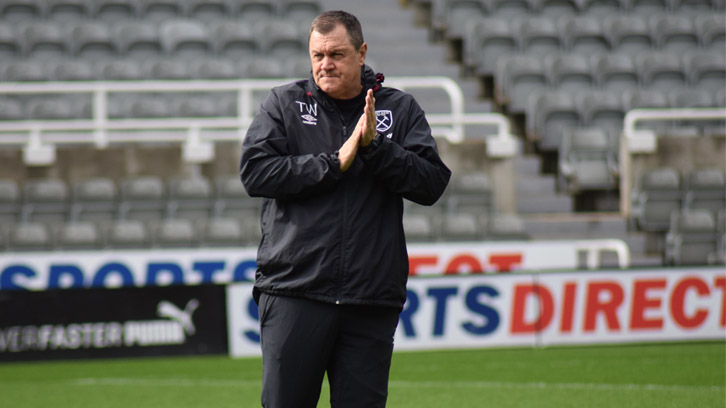 Terry Westley praised the desire of his U23 squad after they came so close to reaching the last-eight of the Premier League Cup at St. James’ Park on Saturday.

The Premier League 2 squad twice went in front against Newcastle United in the second match against the Magpies in the space of six days, but the hosts eventually took a 3-2 lead and held on to go through to the next round.

Ashley Fletcher had put the Hammers in front from the penalty spot and Declan Rice thought he had won the tie with a header seven minutes from time, but Newcastle goals scored by Luke Charman and two by Sammy Ameobi crushed the visitors’ hopes.

The U23s lifted the trophy last season, and though boss Westley desperately wanted to defend the title this campaign, he was proud of his team’s performance.

“The players are gutted in the dressing room, because they’ve given so much,” he said. “It’s disappointing. We’re the cup holders and we wanted to have a real go at it again, and I think you can see that from the manner in which the players played and the effort we put in.

“It was a terrific game. The way we played first half, we were very good and deservedly went in front. Maybe we should have stretched the lead further.

“They kept digging in, and you knew it would be hard to stay in front. Coming up here on Monday, getting back at 4am and then coming back up on Friday made it more difficult for us.

“It was never going to be easy and I think in the end we ran out of steam and it started to affect our decision making.

“It was a great winner, and maybe that was the difference; the way they finished. That tiredness in the end was probably the difference. In normal time, [Marcus ]Browne hit the post and that would have seen us through. We were always in it.”

Even behind in extra time, the Hammers thought they had dragged the game to a penalty shootout when Tunji Akinola found the back of the net from a Browne corner.

However the referee ruled to award the hosts a free-kick, a decision that frustrated Westley.

“I thought it was a goal. I think the ref did well but on the real bid decision, he hasn’t got it right. If anything it was a foul on our player. Over a season, you get some of those though, so you have to take that.

“You have to play with that energy and desire and we did that. Marcus Browne was outstanding, Declan Rice was as the captain, [Dan] Kempy first half, they couldn’t get near him.

“We caused them so many problems but really ran out of gas and steam to see the game through.

“I just said to the lads, we’ve lost but we have two really important league games coming up. We want to try and finish in the top five and we have two huge games left.”