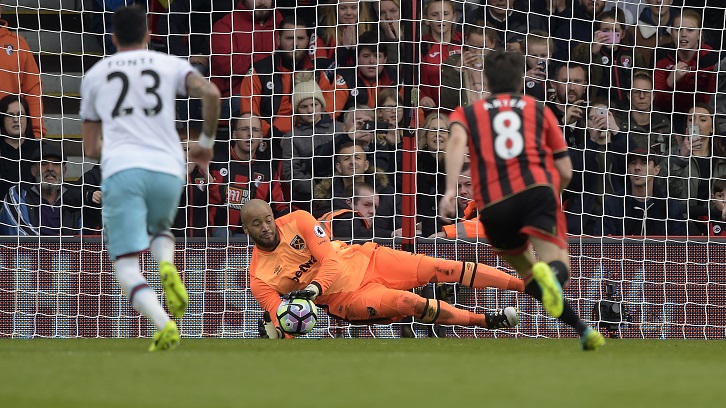 West Ham United paid the penalty for failing to take advantage of two missed AFC Bournemouth spot-kicks to fall to a 3-2 defeat at Vitality Stadium.

The Hammers would have climbed back into the Premier League’s top ten with a point, only to allow Joshua King’s hat-trick to condemn them to a first away defeat of 2017.

King had missed a first-half penalty before Michail Antonio fired Slaven Bilic’s side in front. The Bournemouth striker then equalised and scored a second either side of Benik Afobe’s own miss from 12 yards.

Substitute Andre Ayew looked to have snatched a draw seven minutes from full-time, only for King to win it in the 90th when he slammed the loose ball high into the net from ten yards.

King was the first culprit, firing into the advertising board after Sofiane Feghouli had been adjudged to have fouled Marc Pugh as he burst into the box.

Within 48 seconds, the visitors were ahead as Feghouli made amends by finding the returning Antonio, back after a one-game ban, who controlled and rolled a low left-foot shot beyond Artur Boruc.

With Bournemouth seemingly shell-shocked, West Ham then assumed control and missed a succession of presentable opportunities to extend their lead, with Antonio dragging wide and Manuel Lanzini slamming too high.

Eddie Howe’s side gradually got their composure back and, as they continued to throw players forward with abandon, forced Darren Randolph to save from Ryan Fraser and Steve Cook.

The home side finally equalised on 31 minutes through King when Norway forward flicked the ball over Jose Fonte with his right foot before sending a controlled half-volley into the corner with his left.

Five minutes later and Bournemouth won their second penalty when Fonte was ruled to have tripped Pugh. However, Afobe’s effort was weak and the Republic of Ireland plunged to his right to hold on safely.

To complete a relentless first half, Boruc then made a fortunate save to keep out Feghouli’s deflected effort with his legs, meaning the two sides went in as they started – level.

That remained the case for less than three second-half minutes as Afobe flicked a free-kick into the path of the No17, who swept past a helpless Randolph to turn the game on its head.

Eyes again turned to Mr Madley as he debated with his assistant – either over Afobe’s handling of the ball or whether King should have been adjudged offside from the initial free-kick – before awarding the goal.

Bilic responded by sending on Ayew, Robert Snodgrass and, later, Sam Byram. After both teams had passed up further opportunities – Afobe for Bournemouth and Antonio and Lanzini for West Ham – the changes looked to have paid off when Byram crossed for Ayew to score on 83 minutes.

However, King still had time to crown a memorable personal performance when he was in the right place at the right time to score after Randolph had saved substitute Jack Wilshere’s shot with his left boot.