Stat's a Fact - 3 is the magic number 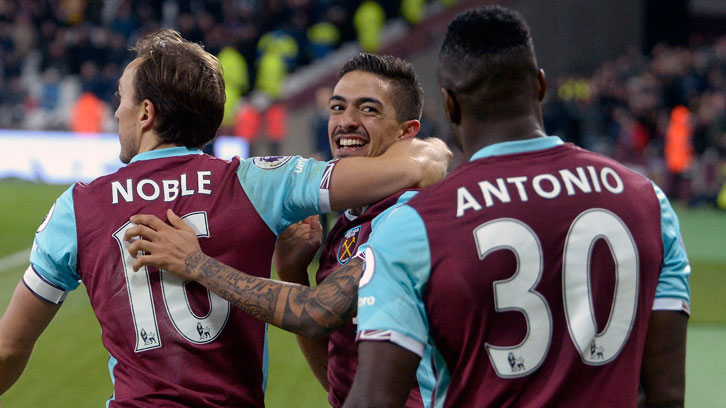 Three really was the magic number on Saturday as West Ham United bagged their first three points of 2017 with a resounding 3-0 win over Crystal Palace at London Stadium.

Despite going in at the break goalless, second half strikes from Sofiane Feghouli, Andy Carroll and Manuel Lanzini secured the Hammers a third win in four against their South London rivals.

After defeat to Manchester United on 2 January, Saturday not only marked the Hammers’ opening three points of 2017 but their first three goals of the year as well.

Sofiane Feghouli tapped in his first ever league goal for the club following excellent work down the left-hand side by Michael Antonio, while Andy Carroll’s 79th minute bicycle-kick will undoubtedly go down as an immediate contender for goal of the season. The Hammers’ No9, acrobatically, got on the end of another Michail Antonio cross to fire past the despairing Wayne Hennessey.

Antonio was again the provider for West Ham’s third as he played through Manuel Lanzini who, 18-yards out, deftly chipped the Palace keeper in the final few minutes of the 90 to complete the rout.

Michail Antonio’s contribution was felt throughout and despite not bagging a goal for himself, he did complete those three valuable assists - his first of any kind this season.

For the opponents, James Tomkins went closest when his effort slid past the back post but otherwise, Crystal Palace’s attacking opportunities were very few and far between. Yohan Cabaye’s 62 successful passes were the most by any player on the pitch, however 25 separate cases of lost possession may have contributed to Palace’s eventual downfall.

Bilic can also take credit for his half-time substitution which saw Sam Byram replace Angelo Ogbonna and the Hammers move to four at the back. Byram, who’s 45 minutes yesterday were his first since 1 October, impressed on his return and will have encouraged a number of onlookers who are hopeful that he can fill the West Ham’s right-back position.

All in all though; a clean sheet, three points and three goals are all big positives for the Hammers as they look ahead to next week’s match with Middlesbrough at The Riverside.

Analyse the game for yourself with in-depth stats in our Match Centre here.