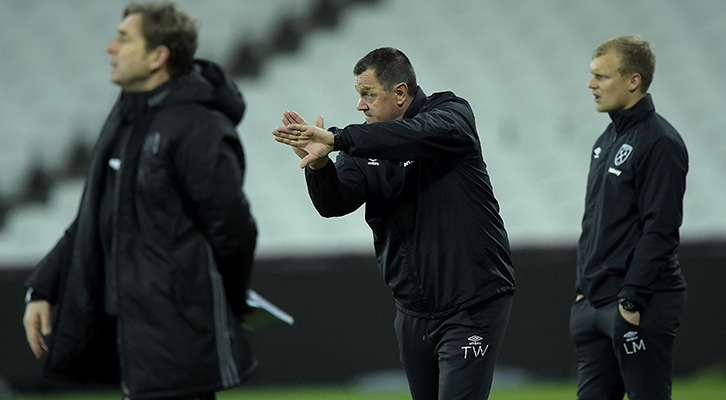 Terry Westley said Nathan Holland’s performance against Fulham reminded him of “a young Ryan Giggs” as the Hammers winger scored and put in a masterful display in their 2-0 win.

Holland only joined West Ham last month but has already stamped his mark on Premier League 2 and the Premier League Cup, scoring three goals in his last three matches.

Westley was keen to praise the 18-year-old winger but was also delighted with what was a crucial win over their London rivals.

“I’d probably say Nathan Holland [was brilliant], particularly in the first half,” said Westley. “What a talent we’ve got on our hands. He was skipping past players, reminding me of a really young Ryan Giggs. I think he particularly caught people eyes tonight.

“What a great stadium and we wanted the players to really express themselves. First half I thought we particularly done that and second half was different in terms of the grit and determination they showed when they were up against it.

What a talent we’ve got on our hands. He was skipping past players, reminding me of a really young Ryan Giggs

“Fulham are a very good side and it was a very good football match for those who come. The standard of the play and the way that both teams tried to pass the ball and move the ball around the pitch was of a high level and we’re delighted to come away 2-0 winners.”

The Hammers looked very much at home at London Stadium, in their first appearance at the club’s new home, having played every other home match this season at Dagenham and Redbridge’s Chigwell Construction Stadium.

Holland and debutant Conor Coventry scored the goals which ended Fulham’s eight match unbeaten run, and strengthened the Hammers own pursuit of a play-off place in Premier League 2 Division 2.

“I said to Liam in the first half that the substitutions are going to be crucial because you could just see the adrenaline and excitement of being around the stadium for the first time taking it out of the players,” added Westley.

“For them to experience that can only help them. This is where they’re going to ply their trade but I was delighted with their application, delighted with the way we played and they way they showed some grit and determination in the end to see the game through.

“Fulham are realistically the only team that can catch Swansea for the automatic promotion place. We think with four to go, we need to win three and one of those was tonight.

“We thought being at our own stadium, it’ll be terrific to win our first game here. We were very young again, when you think of the players who didn’t play, Domingos Quina has played in all our our games and today he was away with the first team. But he’ll be pleased the boys have won and we’re a step closer to those play-offs.”