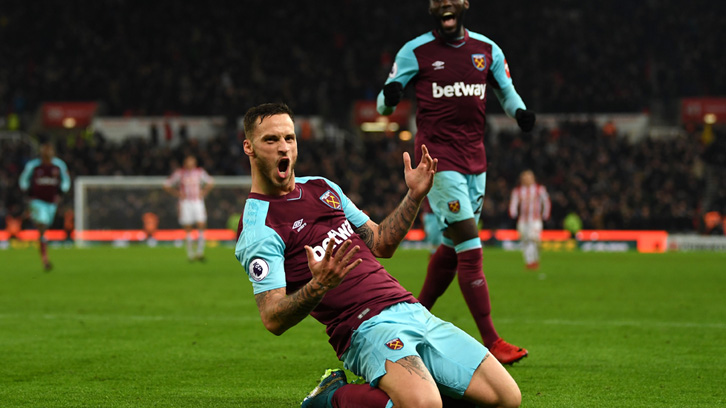 Marko Arnautovic inspired West Ham United to an emphatic victory at former club Stoke City on Saturday as the Hammers were 3-0 winners in the Premier League.

The Austrian was a thorn in the Potters’ side throughout the afternoon, and his second goal in three games – sandwiched between a Mark Noble penalty and Diafra Sakho’s late third – helped West Ham to their first away win in the league since May.

And the win could have been by a far greater margin – Arnautovic himself hit the post twice and Stoke rode their luck at times to stay in the game.

The Hammers were on the front foot from the first whistle and were soon causing Stoke all manner of problems. With just four minutes on the clock, Arthur Masuaku drove into space but sliced an effort just wide from 20 yards.

Five minutes later, Jack Butland in the Stoke goal was called into action for the first time, though Michail Antonio’s shot from the edge of the box was comfortably collected by the England international.

Next it was the hosts’ turn to try their luck at goal. Xherdan Shaqiri dragged an attempt wide with space on the edge of the box but the Potters came extremely close to taking the lead just after the quarter of an hour mark.

The Swiss midfielder floated in a free-kick from range which was met by captain Ryan Shawcross, however, meeting the ball with his head, the defender’s effort rebounded back off the post.

Before Mark Hughes’ men had time to think about the missed opportunity, they were back defending as West Ham and Lanzini broke. The Argentine charged into the left-hand-side of the box and drew the foul from Eric Pieters.

Referee Graham Scott pointed to the spot and the skipper stepped up to confidently slot past Butland to the goalkeeper’s left.

And there were chances for West Ham to extend their lead before the break. First, former Potter Marko Arnautovic was denied on the angle by the goalkeeper before Lanzini lined up a 25 yarder which, again, Butland was on hand to save. 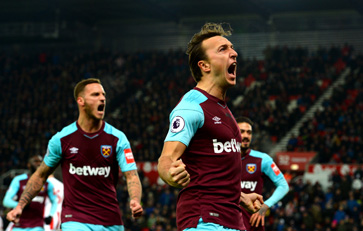 Then, a huge opening came the Hammers’ way. Aaron Cresswell and Masuaku, brilliantly combining down the left, managed to feed Austrian Arnautovic, but after some clever footwork to find an opening, the summer signing smashed over the bar from close range.

After the break, West Ham and Arnie were at it again. Cresswell delivered, Arnatuovic won it, but his header fell onto the crossbar and over.

There was further frustration for Arnautovic nine minutes later, too. Receiving the pass from Masuaku, the No7 had the Stoke half to drive into. Heading towards goal, he checked back inside winger but, agonisingly, his shot was deflected wide.

Incredibly, the Hammers were once again inches away from getting a second through Arnautovic once again. Lanzini, with time to pass, picked out the forward in the box, and cutting onto his left foot, he fired goalwards. Frustratingly, he hit the woodwork for the second time as his attempt cannoned up off the crossbar.

Stoke nearly made David Moyes’ men pay on 72 minutes. Substitute Charlie Adam whipped a superb ball into the Hammers box, and Shawcross, getting between Angelo Ogbonna and the returnining James Collins cleverly, headed over when he may have done better.

It was truly end-to-end stuff at the Bet365 Stadium. That was proved a minute later when West Ham broke, and Sakho side-footed Arnautovic’s centre wide of the post with more time than he realised.

All those missed chances were then forgotten, however. A quarter of an hour remained, and the Hammers decided enough was enough. Lanzini played a one-two with Arnautovic, and – it had to be him – the Austrian slotted under Butland to make it 2-0. Job done.

Job done, but the Hammers wanted more and they got it with four minutes remaining. Lanzini, creative throughout the afternoon, slipped in substitute Sakho, and the forward slotted home confidently to make it 3-0.