Valiant Hammers undone by second half double at Man City 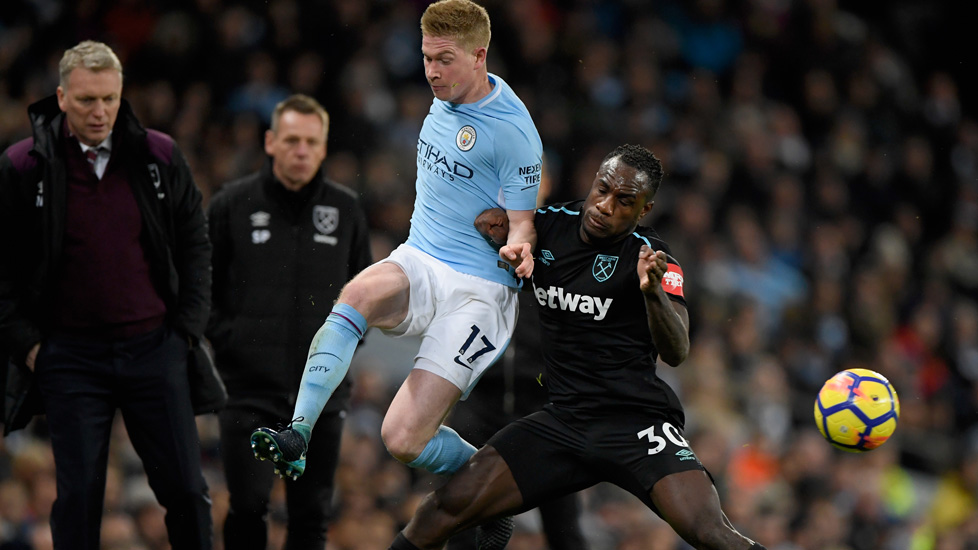 West Ham United gave a valiant performance but were undone by a brace of second half goals as Premier League leading Manchester City secured a 13th successive win on Sunday.

The Hammers were compact in defence whilst possessing a threat on the break and took the lead before the interval, Angelo Ogbonna rising highest to convert Aaron Cresswell’s right wing cross.

That left the visitors dreaming of an against-the-odds victory, but City regrouped after the break and made their pressure pay with goals from Nicolas Otamendi and David Silva.

David Moyes made four changes to his starting eleven, with Adrian, Declan Rice, Edimilson Fernandes and Michail Antonio coming in and the visitors wasted no time in settling down to their task.

City bossed the ball in the early stages, holding 75 per cent possession in the first quarter of the contest, but the Hammers had a threat on the break and it was they who created the first two chances.

With seven minutes played Cresswell played over a threatening corner from the right, Cheikhou Kouyate won the flick and Antonio knocked over at full stretch.

Then, nine minutes later, Arthur Masuaku showed good feet to work a crossing position from the left and Antonio almost managed to squirm past Ederson down low.

With 25 minutes on the clock the hosts made their possession count for the first time as Fabian Delph cleverly let Kevin De Bruyne’s square pass run to David Silva, and his rising effort needed a smart touch over from Adrian.

With Antonio an outlet for the Hammers, West Ham did look to stretch their hosts when they could and Ederson had to be alert to deny Lanzini nine minutes before the break when he thundered a snapshot goalwards after the ball broke to him inside the box.

On the stroke of half time, though, the City keeper was powerless to prevent Ogbonna’s towering header from crashing home, after Cresswell and Lanzini combined from a short corner for the former to cross.

It was reward for an efficient half from the Hammers, who looked a threat when they had the opportunity to get at the home defence and were doing a good job of containing them at the other end.

The league leaders brought on Gabriel Jesus at the break in response and as they upped the tempo Delph won a free-kick on the edge of the box with 56 minutes played. Adrian did well to beat De Bruyne’s fierce effort away, but less that a minute later City were level.

Otamendi had stayed forward from the free-kick and he was ideally placed to stab home after Jesus had wriggled clear to cross low from the right.

With more than half-an-hour to play the Hammers had to dig in and Adrian had to make a couple of fine saves to keep them level, flying to his left to push Leroy Sane’s effort away on 61 minutes, then going even better to deny Jesus with a strong left hand after the Brazilian worked the ball onto his right foot to curl an shot goalwards.

West Ham were continuing to defend well, but City kept on coming and with seven minutes left to play they found a way through when Silva peeled off his man to reach De Bruyne’s clipped pass with a acrobatic left footed volley which left Adrian no chance.

There was still time for one more Hammers chance as Marko Arnautovic got the better of Eliaquim Mangala down the right and crossed low for Diafra Sakho, who steered his shot wide of the near post.