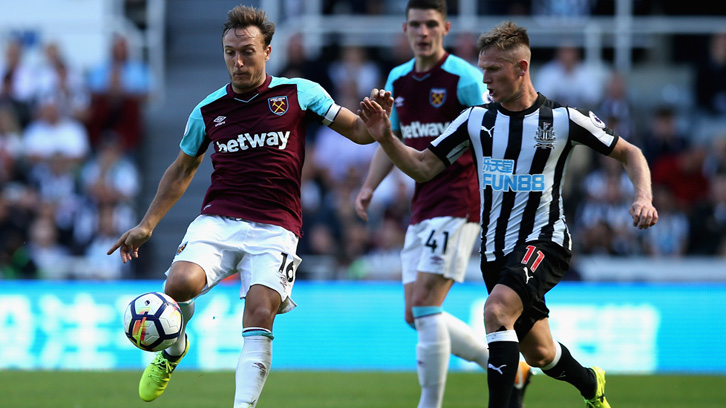 It was a day to forget in the north east for West Ham United on Saturday as Newcastle United were 3-0 winners in the Premier League.

Slaven Bilic made two changes to the starting XI which so nearly won a well-earned point with ten men against Southampton last week, continuing with James Collins at the back after a fine Carabao Cup performance at Cheltenham and restoring Edimilson Fernandes to the team.

The first half was a feisty affair but until the half hour mark, provided little in the way of goalscoring opportunities.

Isaac Hayden did fire just over from the edge of the box on the 20-minute mark after the Hammers had cleared a corner, though the shot was never troubling Joe Hart in goal.

The Hammers ventured forward with 15 left to play in the first period and came close to breaking the deadlock in the north east.

Mark Noble, deep in the Newcastle half down the right-hand-side, checked back onto his left, before sweeping in a cross which eventually was headed by Andre Ayew.

The forward’s knock-down found its way to Aaron Cresswell, but the full-back spurned the chance, slicing his half volley just over from a tight angle.

Ayew did have a go at goal at goal himself just moments earlier, but his long range effort was curled well over the crossbar.

And despite the pressure from the visitors, it was Newcastle who took the leads six minutes later.

Declan Rice was caught in possession in midfield, and the Magpies countered quickly; Atsu, racing past Zabaleta in the left-hand-channel, found himself one-on-one with Hart and, aware of his surroundings, cleverly laid-off for Joselu to poke into the empty net.

Just seven minutes after the restart, the Hammers were so nearly back on level terms.

Cresswell – who was named in Gareth Southgate’s England squad this week – was again involved.

Latching onto Antonio’s through ball, the Liverpudlian this time hit the target and as Rob Elliot in the home goal parried straight into the six-yard-box, Chicharito’s stab at goal was just cleared by Ciaran Clark a yard away from crossing the line.

Next, it was the hosts’ turn to threaten. With Rafa Benitez’s side driving forward in numbers on the hour mark, Ayoze Perez did well to hold the play up and set Matt Ritchie on his way.

The former Bournemouth man, approaching the box, let fly with his left foot, but Hart was equal to the effort. A quick-thinking Pablo Zabaleta, first to the rebound, denied Joselu a certain second.

That second came for Newcastle ten minutes later, though. Ritchie – again the danger man – delivered a beautiful cross in from the right, and Ciaran Clark – up from the back – headed in against the post to put the game beyond West Ham’s reach.

Moments later, Ritchie was denied a third for the home team as Angelo Ogbonna threw himself in front of a goalbound effort to keep the deficit at two.

But into the last five minutes, the hosts were looking for a third and got it with four left to play. A simple header over the top found Ritchie, whose through ball left sub Aleksander Mitrovic with Hart to beat.

Rounding the stopper, the forward completed the scoring, rounding off a day to forget in the north east for the Hammers.